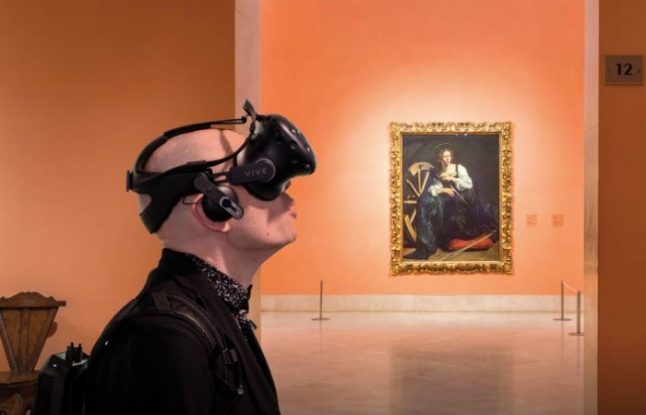 The museums of Madrid are throwing open their doors long into the night. Photo: Museo Nacional Thyssen-Bornemisza

Much like during Art Night London or the Nuit Blanche in Paris, museums in the Spanish capital will be extending their opening hours into late Saturday night, allowing free access to exhibitions and displays that are normally paid for, as well as presenting talks, performances and other special events.

Agnish Ray a museum lover who lives in Madrid highlights what to look out for during La Noche de los Museos this weekend.

Fashion and virtual reality, at The Thyssen

A sumptuous exhibition is spread across the Museo Sorolla and the Museo Thyssen-Bornemisza, presenting Spanish impressionist Joaquín Sorolla’s portraits of decadently clad men and women from the various ranks of Spanish society. Alongside each portrait stands a mannequin sporting the same, real life garments as those worn by the subject of the painting.

The Thyssen also presents a cutting-edge virtual reality experience this weekend – special 3D headgear let visitors virtually enter into the spaces of the paintings they stand before, allowing them to walk the meadows of Auvers painted by Van Gogh and the streets of New York that inspired Mondrian. Design enthusiasts should visit the Herzog & De Meuron-designed CaixaForum for a chance to see Spain’s first exhibition on Austrian-Czech architect Adolf Loos, one of the key figures of Viennese fin-de-siécle modernist design. Loos once said: “The home must be pleasing to everyone, unlike a work of art, which doesn’t have to please anyone. The artwork is a private matter of the artist – the home is not.”

The show presents a collection of 120 furniture and household items, as well as drawings, photographs and maquettes, all exploring this designer’s pioneering position in the debate on private and public spaces.

Belle Époque and dancing, at the Museo del Traje An exhibition at the Clothing Museum looks at the world of dressing during the period between 1890 and 1914, displaying pieces of tailoring and sewing equipment, department store catalogues, tailoring manuals, clothing accessories, and fashion spreads from various magazines and newspapers in the Spanish and foreign press from the period.

Visitors can also experience the dances of the Belle Époque period, such as the vals, the tango and the scandalous cancan, in performances and workshops taking place over the weekend.

Yesterday and today, at the Museo del Romanticismo

The Romanticism Museum is looking to highlight the surprising connections between 19th century and 21st century needs, sensibilities and ways of living. The museum will hide pieces of IKEA furniture in its 19th century living rooms, challenging visitors to identify which ones they are. The exercise will illustrate the how our modern appreciation of comfort and its association with living room furniture, in many ways, originate in the Romantic period.

A separate event will see dancer Patricia Ruz and pianist Ramón Grau performing a piece of contemporary dance and music in homage to the women of the Romantic period and their achievements in poetry, journalism, painting and performing arts.

Paintings on stone and a Rubens retrospective, at The Prado

The Museo Nacional del Prado is allowing late-night access to two of their special temporary exhibitions. The first is a selection of paintings on monochrome stone (slate and white marble) from the early decades of the 16th century, highlighting the relationship between painting, geology and archaeology.

The second is a collection of over 70 paintings by Flemish Baroque master Paul Rubens, loaned from leading institutions around the world. The display is the culmination of an exhaustive research project directed by the museum, offering an analysis of Rubens as the most important painter of oil sketches in the history of European art.

The special activity at the Museo de América this weekend is programmed around one remarkable centrepiece – an ancient silver vessel from the Chimú civilisation, a powerful kingdom on the deserts of Peru's north coast, spanning the period 1000-1470. Precious metal production was prolific in this region during the time of the Chimú. The silver artefact going on display in Madrid has been loaned by the Metropolitan Museum of Art in New York. The exhibition Between Birds and Gods remains on display at the Museo de América until September.

Circus and magic, at the Anthropology Museum

Isn’t the circus the greatest show in the world? That’s the question posed by the Museo Nacional de Antropología this weekend. Clowns, acrobats, magicians and street-artists from avant-garde Bambolea company will transform the museum into a contemporary circus space, for one night only. Bambolea specialises in promoting circus arts with the aim of giving them greater recognition within the broader landscape of contemporary culture.

For a list of all the activities on offer during the Day and Night at the Museums. Look at the guide published by Spain's cultural ministry.