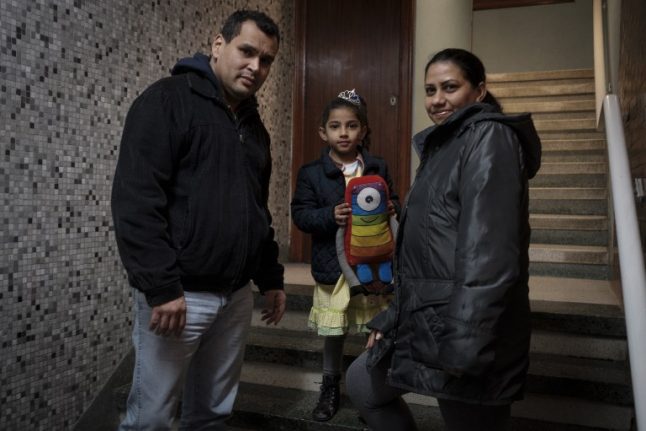 Now, many are coming back to Galicia — or at least their descendants are — escaping an acute crisis in Venezuela for the remote Spanish region and lured by authorities there faced with an ageing population.

Carlos Veiga, a 44-year-old from Caracas whose parents were from Galicia, arrived in Vigo, an industrial coastal city surrounded by green mountains, in November with his wife and two sons.

And swapping the Caribbean for the rough, stormy sea of the Atlantic was a shock.

“We arrived and they had to send me and my son to hospital urgently for alung infection because of the cold and rain,” he tells AFP.

“Thanks to my parents, I was able to get the Spanish nationality, which I never thought I would use.”

Back in Venezuela, Veiga was kidnapped for ransom. The ordeal only lasted a few hours, but it was the last straw for him. That, and a general lack of medicine in Venezuela, including vaccines for his kids, pushed him to leave the country.

He is one of thousands who have escaped in the past years, many opting to come to Spain despite its recent economic crisis and sky-high unemployment.

Of these, thousands go to Galicia, where incentives are promoted by authorities encouraging migrants to return to a region that saw part of its population flee poverty for Latin America in the 20th century.

The regional government has said it will provide €2.2 million ($2.6 million) in aid this year for migrants who return.

“Galicia has demographic problems, a high rate of elderly people,” said Antonio Rodriguez Miranda, in charge of migration for the regional government.

“Many people left and now they can go full circle and their grandchildren or great-grandchildren can return to their homeland.”

Galicia has some 2.7 million inhabitants, of whom close to 24,300 are Venezuelan, according to the last official statistics from January 2017. Venezuelan Susana (L) and her mother (no name given) pose in Vigo, northwestern Spain.

But Venezuelan associations say the number of arrivals has soared since then.

Eight out of every 10 people who ask for the subsidy for returning migrants are Venezuelan, according to the regional government.

Veiga was unable to sell off his construction company in Venezuela, just like many others in the country where the deep economic crisis is hindering the sale of property or goods to emigrate.

But despite the financial struggle, he says his family is recovering “a quality of life that we lost in Caracas”.

Torn between both countries

Hermosinda Perez left the coastal Galician town of Muros when she was 17 in the 1950s, when Venezuela's massive oil reserves brought promises of a brighter future.

Six decades later, she returned to Galicia with a heavy heart, as there was no oxygen available in Venezuela for her husband's pulmonary emphysema.

“It's sad, because I came back to my country, but that (Venezuela) is my country too,” the 80-year-old says darkly in the living room of the two-bedroom flat in central Vigo she shares with her 43-year-old daughter, son-in-law and two granddaughters, who are eight and six.

“I never thought I would come back. I was fine out there, I have it all there, the house, a beach flat, my life,” she says.

Perez can't get her Venezuelan pension as Caracas stopped paying it to people abroad two years ago, so she relies on her daughter who along with her husband invested their savings in a small cigarette shop in Vigo. But for Monica Janeiro, these difficulties are worth it.

Her family had to rely on the Caritas charity for food vouchers and on the Red Cross for courses to enter the job market.

“I may not have much, but we lead a tranquil life and compared to Venezuela, it's great,” she says.