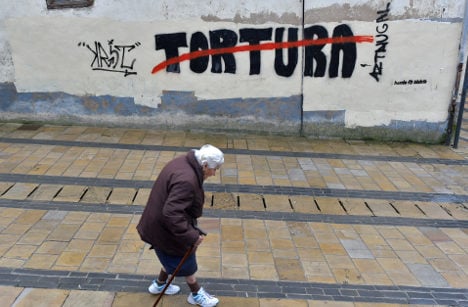 A woman walks past a graffiti against torture in the Spanish Basque village of Agurain on May 3rd. Photo: Ander Gillenea/AFP

Created in 1959 at the height of Francisco Franco's dictatorship, ETA is blamed for the deaths of at least 829 people during its campaign of bombings and shootings for an independent Basque homeland in northern Spain and southwest France.

In what it said was its final statement released Thursday to announce it was disbanding, ETA presented itself as a “Basque socialist revolutionary organisation for national liberation”.

“Left-wing pro-independence people will work for this to lead to the establishment of a Basque State,” the statement added.

Since its emergence in the 1970s, the Basque Country's “Izquierda Abertzale”, or Basque Patriotic Left, has been accused of being close to ETA.

EH Bildu's leader Arnaldo Otegi was a member of ETA during his youth before in 2000 he came out against the group's use of violence to achieve Basque independence.

Leftist Basque separatists “must assume the responsibility of their past, because if ETA existed for so long, it is because this world provided it with social support,” Patxi Lopez, the former Socialist head of the Basque regional government, said on Friday.

ETA in effect backed the former separatist coalition Herri Baratuna, for example by ceasing its attacks just before elections so as to not hurt them at the polls.

For its part, leftist Basque nationalist parties took ETA's demands into the political sphere, such as for jailed ETA militants to be moved to jails in the Basque region so as to be closer to their families.

“They tried to cover up and legitimise ETA. They were the civil branch of the terrorist organisation,” said Gaizka Fernandez, a researcher with Spain's Memorial Center for the Victims of Terrorism.

Now that ETA has disbanded, there is a “very bright future” ahead for leftist Basque separatist parties, said Swiss political scientist Oliver Strijbis.

“They have less of a legitimacy problem. ETA is no longer in their way to achieve their political goals,” he told AFP.

In addition, since the more moderate nationalist PNV party, which heads the Basque regional government, now only defends the “right to autodetermination”, the Izquierda Abertzale has a virtual monopoly on voters who back independence for the region.

“The different examples in Europe show that the end of armed activity and the subsequent dissolution of an armed group benefit the party which is closest to its ideological plan,” said Eguzki Urteaga, a sociologist in the French Basque region.

He cited as examples Ireland's Sinn Fien and nationalist parties in France's Corsica.

The Izquierda Abertzale rose in the polls in a general election held in Spain in 2011 after ETA announced it had given up violence, winning 24.1 percent of the vote in the Basque Country.

In regional elections the following year, it won 24.8 percent of the vote, making it the second largest grouping in the Basque parliament.

Some analysts feel ETA's last step will have less of an impact.

“What has been made official is the burial of the corpse but the body was already there, the monster was already dead,” said Fernandez.

The ghosts of the past continue to haunt leftist Basque separatists. EH Bildu is calling for the roughly 300 ETA militants held in jails across Spain and France to be incarcerated in the Basque Country to support the  “peace process”, a move rejected by Prime Minister Mariano Rajoy's conservative government.

This is a step backwards for leftist Basque separatist parties which have long demanded an amnesty for ETA prisoners, said Urteaga.

At the same time, they continue to stage welcome ceremonies for ETA members who leave prison, angering victims' groups.

“They have a hard time recognising that ETA's 60-year history has been a mistake… so instead of treating terrorists as criminals, they continue treating them like heroes,” said Fernandez.

Strijbis predicted this would continue.

There is a large part of Basque society that thinks that ETA had legitimacy with Franco and that its members, or a wider swath of radical nationalists, were not well treated by the Spanish state,” he said.

PARTNER CONTENT
93 percent of this MBA’s graduates have doubled their salary
Url copied to clipboard!