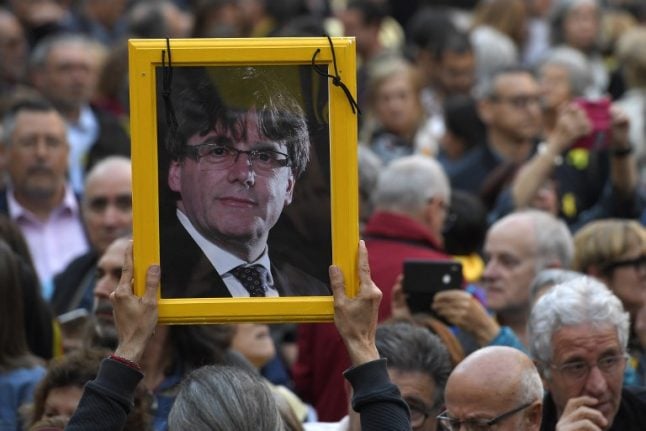 Protesters hold a framed picture of Catalonia's self-exiled ousted president Carles Puigdemont during a demonstration in Barcelona on May 2, 2018.Photo: Lluis Gene/AFP.

Catalan separatists have won a key vote in the regional Catalan parliament in a move designed to allow self-exiled president Carles Puigdemont, who is currently wanted on charges of sedition by a Spanish court, to be sworn-in as president from distance. The alteration to the law means Puigdemont would not have to be present in person at the swearing-in ceremony.

Puigdemont faces charges of sedition before a Spanish court should he return to Spanish territory. Puigdemont fled to Brussels – then Denmark, now Germany – in November 2017.

Spain's highest court moved in February “to preventively suspend the investiture of Puigdemont unless he appears in the (regional) parliament in person with prior judicial authorisation”.

Puigdemont was arrested in Germany on a Spanish extradition warrant in late March 2018, but a regional German court rejected the extradition request on the basis there is no legal premise for it in Germany. Puidemont was subsequently released on bail.

The reform to the Presidential Law was approved by 70 'yes' votes, with 64 delegates voting against. The new law would allow Puigdemont to resume the role of Catalan president, albeit from abroad.

The regional government's move will potentially stoke tensions again with Mariano Rajoy's government in Madrid. In January 2018, the Spanish government filed a legal challenge with the country's Constitutional Court against Puigdemont's bid to return to power, on the grounds that as a fugitive of justice, he cannot be elected.

“A person who is wanted in national territory for such serious crimes cannot try to be sworn in as head of the Catalan government without having faced up to his responsibilities with the law,” Spain's Deputy Prime Minister Soraya Saenz de Santamaria said after announcing the appeal.

The Catalan parliament has said it will enlist the support of The European Court of Human Rights to invest Puigdemont as president.