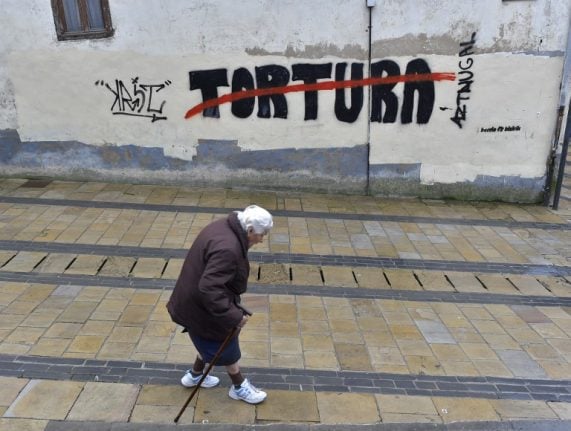 A woman walks past a graffiti against torture in the Spanish Basque village of Agurain on May 3. Photo: Ander Gillenea / AFP

“No matter what ETA does, there is no room for impunity for its crimes. ETA  can announce its disappearance but its crimes do not disappear nor do the efforts to pursue and punish them,” he said in a televised speech in the northern city of Logrono.

“We don't owe them anything and we have nothing to thank them for,” Rajoy added.

His comments come as ETA is expected to formally announce its dissolution Thursday with a filmed statement, marking the definitive end to western Europe's last armed insurgency after more than four decades of violence. Created in 1959 at the height of Francisco Franco's dictatorship, ETA waged a relentless campaign of killings and kidnappings in its fight for an independent Basque homeland in northern Spain and southwest France, leaving at least 829 dead.

Weakened in recent years by the arrest of its leaders, ETA announced a permanent ceasefire in 2011 and began formally surrendering its arms last year.

In a leaked letter published Wednesday by Spanish online newspaper El Diario, the group went a step further, announcing it was fully disbanding.

“ETA has completely dissolved all of its structures and declared an end to its political initiative,” it said.

The regional leader of Spain's Basque Country, Inigo Urkullu, said he hoped ETA's end would be “unilateral, effective and definitive”, in an interview published in newspaper El Pais on Thursday.

The group “owed” this step to “Basque society and humanity as a whole”, he added.

“ETA never should have existed. It puts an end to a dark chapter of 60 years.”

Spanish press have also reported that veteran, high-level ETA member Jose Antonio Urrutikoetxea, better known as Josu Ternera, will be in the video.

The 67-year-old is a wanted fugitive who disappeared in 2002 and is said to be suffering from cancer.

His potential presence in the video has infuriated some of ETA's victims, who say the separatist group should first and foremost condemn its history of violence and shed light on more than 350 unsolved crimes.

“This is not the end of ETA we deserved,” said Consuelo Ordonez, head of the Covite victims' association, on Wednesday.

A partial apology by the separatist group last month, in which it acknowledged the harm done and apologised to some of its victims — but not to those it considered legitimate targets such as police — has done little to stem the criticism.

While an overwhelming majority of Basques welcome the end of violence, many still want independence.

The separatist coalition EH Bildu, the second largest grouping in the Basque parliament, won 21 percent of the vote in 2016's regional elections.

Critics charge that pro-independence parties, which include people once part of or linked to ETA, are trying to impose their version of events.

Separatists argue that Basques have been repressed for decades, even centuries, by Spain and France. This came to a head under Franco, who forbade the use of the Basque language in public.

Victims and historians, though, insist ETA was a terrorist group that went on killing even after Spain transitioned to democracy in the late 1970s. It is recognised as such by the European Union.

“ETA never wanted to bring about any democracy or any freedom, it wanted to end it,” said Basque philosopher Fernando Savater.

“And that's what we want to remind people.”

But apart from ETA victims, there were also separatists killed by far-right groups and death squads backed by members of Spain's security forces in what has become known as a “dirty war” campaign.

According to a December report commissioned by the Basque regional government, more than 4,100 complaints of police torture were made between 1960 and 2014.

Those victims are also demanding they be acknowledged.

“If you don't recognise part of the suffering, it's very difficult to create conditions for… reconciliation,” said Ane Muguruza, 28.

“It's very difficult when there are open wounds.”

Her father Josu, a lawmaker for Herri Batasuna, ETA's political wing, was murdered in 1989 by far-right militants she believes were state-backed.