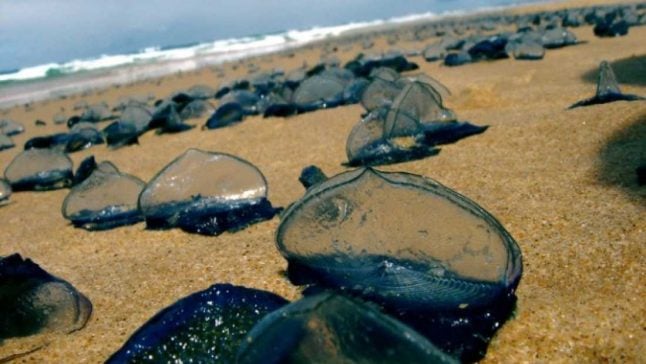 The small creatures have been identified as Velella velella, not strictly a jellyfish but floating colonies of microscopic hydrozoansthat typically live far offshore in open ocean waters, where their little ‘sails’ help distribute them using the force of the wind.

The species, known in English as ‘By-the-Wind Sailor’, are fairly common in open waters but are rarely seen washed up in Mediterranean waters. Such mass strandings are common on the West coast of the USA.

Recent high southerly winds and strong sea currents are blamed for washing carpets of them on shore at beaches along the Catalan coast over the weekend.

“Impressive plague of blue #jellyfish on the beaches of Barcelona / Barceloneta. They are cnidarians, hydrozoa, Velella velella species, abundant in spring, circular, bluish and slightly stinging. From afar and for their colour they look like small mussels, but they are not molluscs” observed biotechnologist Lluis Montoliu.

Although the species is related to the deadly Portuguese Man O’War, Velella are completely harmless to humans.

Similar swarms were washed up along the Costa Blanca earlier in April.

Barcelona city council have confirmed that a clear up is now in process after experts concluded that the creatures were harmless.