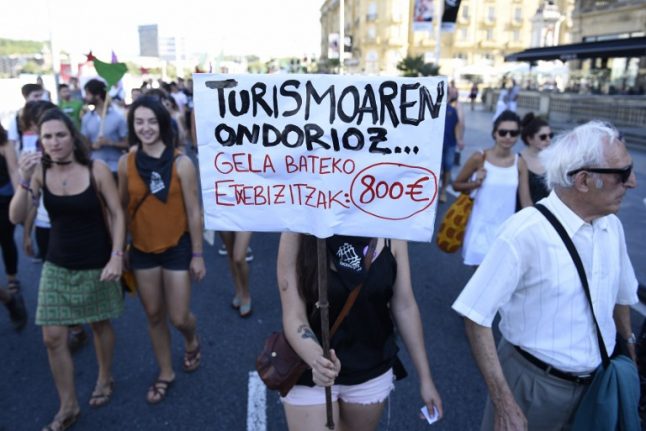 A protester in San Sebastian in 2017 holds a placard reading in Basque: "Because of tourism... One rooms flat equal 800 euros." Photo: Ander Gillenea/AFP.

The “SET network” of cities of southern Europe against tourism plans to stage joint protest actions to pressure governments to “establish limits to the tourist industry” and even promote its “decrease”.

For the moment the network is made up groups from ten Spanish cities including Madrid, Barcelona and Palma de Mallorca as well as Lisbon and Venice. It also includes Spain's Canary Islands and Malta.

Last week Palma became the first Spanish city to ban holiday rentals, but protests against mass tourism have been held in several Spanish regions in recent years. Spain is the number one European destination in terms of arrivals and overnight stays.

Venice has restricted access to cruise ships due to mass congestion in the canal city, while other Italian cities like Naples and Palermo have long bemoaned the impact mass tourism has on water resources and the environment.

READ ALSO: Venice's mayor says ministers have a plan to keep big ships out of the lagoon

The creation comes as cities across Europe have stepped up their efforts to crack down on home-sharing sites such as Airbnb as concern mounts over the side effects of their increasing popularity amid fears of a housing shortage for local residents.

International tourist arrivals grew by 8.0 percent in the European Union last year, to reach 538 million, or 40 percent of the world's total, according to Madrid-based United Nations World Tourism Organisation.