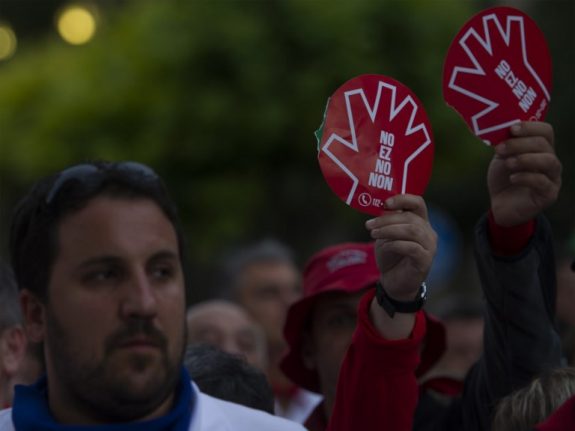 A man holds a sign saying 'No is no' during a protest against sexual assault in Pamplona. Photo: Miguel Riopa/AFP.
The five men, known as the 'wolf pack,' accused of raping a Spanish teenager two years ago during the Running of the Bulls festivities in Pamplona have been given a nine-year prison sentence.
– The sentence was much leaner than public prosecutors had called for
– Further outrage has been caused by the fact that the accused were found not guilty of the crime of 'sexual aggression”, which implied they did not use violence
– The five men had exchanged graphic WhatsApp messages glorifying rape before the act, suggesting it was premeditated
– Women's rights groups and campaigners pledge to carry on fighting for justice
– Protests continue outside the court in Navarre, where the sentence was read
– The Navarre regional government says it will appeal the court's sentence
16:02: Protests continue outside the court in Navarre, northern Spain. Video.
15:08: The lean sentence is particularly troubling for some observers given that two of the five men accused held positions of authority. Alfonso Jesús Cabezuelo worked in the military, while Antonio Manuel Guerrero was allegedly a cadet in Spain's national police, the Guardia Civil, reports El Plural.
14:52: One of the three judges that made up the panel that sentenced the five men accused of raping a Spanish teenager at the Running of the Bulls festivities in Pamplona in 2016 called for the men to be absolved of all charges, a detail that is likely to further aggravate the Spanish public.
The magistrate apparently called for all charges to be quashed and for one of the accused to be charged with theft – of the victim's mobile phone – instead, reports Balearic daily Diario de Mallorca.
14:46: A spokesman for the Basque government, Josu Erkoreka, has added his condemnation to the sentence, stating that it is “incomprehensible” how the court ruled that the act was void of intimidation or aggression, according to local news platform Noticias de Navarra.
14:40: Spain's Policía Nacional have reiterated their support for victims of sexual violence with a tweet that repeats 'No is no' 12 times. 'We are with you' reads the end of the tweet.

14:34: The regional government in Navarre has said it will appeal against the sentence, which it does not agree with.
“With respect to judicial decisions and the work of judges, the Government of Navarre does not share” this ruling that “does not respond to the position that the legal services of the Government of Navarre have defended in this process” and that “significantly reduces the crime committed in a way that interprets that there was no violence or intimidation,” a spokeswoman for the Navarre regional government, reports regional news portal Noticias de Navarra.
14:14: The accused were found guilty of sexual “abuse”, which according to El Pais, is defined by article 181.3 in law as: an…”attempt against the liberty or sexual indemnity of another person”, without “violence or intimidation”, but when the consent has been obtained “by the prevailing person in a situation of manifest superiority that coerces the victim's freedom”.
The accused were not found guilty of the charge of sexual aggression under Article 178, which implies sexual abuse using “violence and intimidation”.
13:59: Crowds of protesters outside the court in Navarre are protesting and chanting 'La Manada', reports El Pais.

13:55: Podemos spokeswoman Irene Montero expressed outrage that the evidence has not amounted to a sentence for rape. “Five aggressors force a girl into a door and rape her. It's evident there was intimidation. That they were acting like a pack. That there was aggression. This sentence should be rape. While justice doesn't protect us, we'll look after each other,” tweeted Montero.

Spanish criminal law makes a distinction between sexual “abuses” and “aggression.” The accused were found guilty of the first charge, but cleared of the second, which implies “intimation and violence.”

13:46: Besides the lean sentence, Spanish media and activists are asking why the accused were found guilty of “an act of sexual abuse” but not guilty of rape or “sexual aggression” – which would have carried a stronger sentence.

13:41: More than 100 local and international journalists sought accreditation for the small regional court to hear the sentence, reports El Mundo.

13:38: The case has gripped Spain over the last two years and there has been an outpouring of outrage at the act and support for the victim, using the hashtag #YoTeCreo (I believe you) on social media networks.

13:33: Feminist and activist groups had called for a much stronger sentence. Some expressed disappointment that the perpetrators did not get the full sentence called for by prosecutors in what is considered a landmark case in Spain.

13:27: Neither the victim nor the accused were present when the sentence was read, reports Spanish daily El Pais.

13:22: The court in Navarra, in the Basque autonomous region, has sentenced the five accused from Sevilla to a nine year prison sentence. Spain's public prosecutor had been pushing for a sentence of at least 22 years and 10 months for each of the accused, reports El Mundo. The regional prosecutor in Pamplona had been pushing for a 25-year sentence.

The case, known in Spain as 'La Manada', has galvanized women's rights group and campaigners against domestic violence in Spain. Twenty four hours before the verdict, a group campaigning against violence against women – Lunes Lilas y Gafas Moradas – released a video showing solidarity with the victim and calling for a maximum sentence.

One of the accused met the victim, known only as C., on a park bench in Pamplona at 2.50am. The accused's friends later joined them and offered to walk the victim back to her car, where she was sleeping.

They allegedly forced her into a flat en route and each raped her. El Mundo has the full timeline of alleged events here.

The accused are known as 'La Manada' or the 'Wolf Pack' after names they used to describe themselves in a WhatsApp group. The graphic and violent messages exchanged by the accused in a WhatsApp group suggested the act was premeditated, although the messages were not admitted as evidence in court.