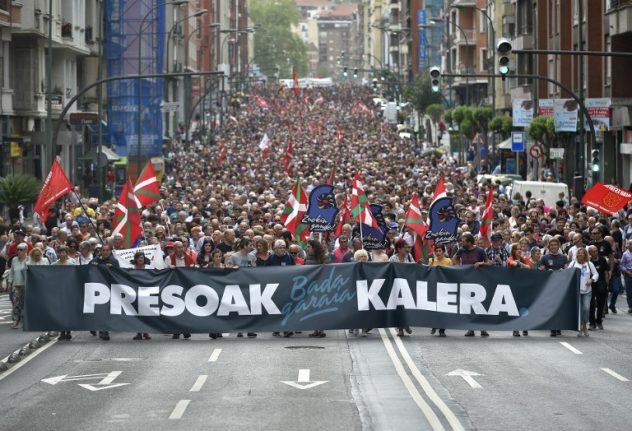 A demonstration in Bilbao on April 21st calling for Basque prisoners to be transferred to the region. Photo: Ander Gillenea/AFP.

Bayonne prosecutor Samuel Vuelta Simon said he had received an email  tip-off that “a quantity of arms” belonging to ETA had been retrieved by police after being dropped at a location in the south of the French Basque city.

The announcement comes days before ETA is expected to announce its dissolution, definitively ending its nearly four-decade campaign of bombings and shootings for an independent Basque state in northern Spain and southwest France, seven years after it declared a permanent ceasefire.

A source close to the case said the police had found four cases “in the  open air, in the city centre” containing around 20 handguns, several hundred  bullets for 9mm and .38-calibre revolvers and a 20-metre-long detonator cable as well as several electronic detonators.

They also found around 200 fake registration places and materials that can be used to steal cars, added the source, who requested anonymity.

A member of a group mediating in the peace process told AFP that ETA had committed to finding those weapons “which had gone astray” and not been included on the list.

“This restitution process, which remains confidential, is ongoing,” Jean-Noel Etcheverry said. Last week ETA asked forgiveness from its victims for the “pain” caused by  its campaign, a move seen as a necessary step towards reconciliation.

Created in 1959 at the height of Francisco Franco's dictatorship ETA is blamed for the deaths of at least 829 people. International mediators are organising a peace conference in southwest France on May 4th.