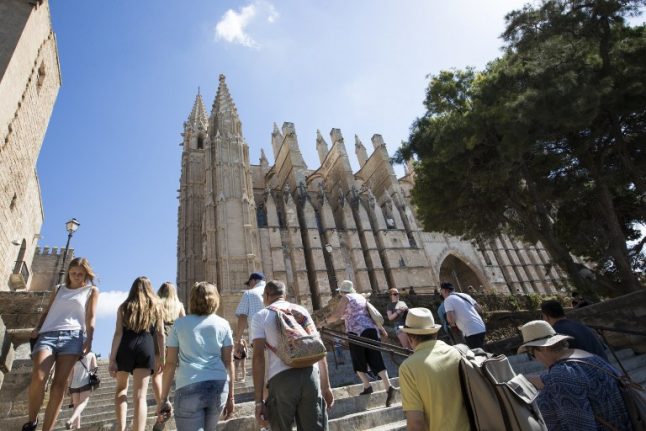 Tourists throng around the cathedral in Palma. Photo: AFP

The city council has introduced a measure to prohibit private owners of apartments from renting out their properties to holidaymakers as part of a backlash against mass tourism.

The ban, which will become effective from July, does not include detached homes and villas.

The measure was a reaction to a surge in the price of housing in the Balearic capital, where property prices went up by 7.4 percent in 2016 and the cost of renting has soared by a staggering 40 percent since 2013.

The number of private home holiday rentals offered in Palma has soared thanks to the popularity of sites such as Airbnb. Studies show that the number of unlicensed tourist apartments on offer in Palma alone grew some 50 percent between 2015 and 2017, according to El Pais.

Of an estimated 20,000 apartments on offer for short-term rentals in the city, only 645 have proper licenses.

“We agreed on this on the basis of the general interest, and we believe that it will create a trend in other cities when they see that finding a balance is key.”

It isn’t the first Spanish city to attempt to curb private rentals. Authorities in the city of Barcelona, Spain’s most popular tourist destination are waging war on the shared holiday rental economy, imposing new regulations and steep fines on companies such as Airbnb and HomeAway.

Last summer the regional Balearic government passed strict new laws to limit the number of holidaymakers to the islands in a bid to curb the mass tourism that is sparking conflict with locals.

The number of tourist beds will be capped at a combined 623,624 on the popular islands of Mallorca and Ibiza and those who attempt to rent out unlicenced properties could be fined up to €400,000.

The latest move against tourism reflects the growing malaise by residents against an industry that is growing year by year fuelled by the popularity of home rentals.

In recent years, anti-tourist graffiti has appeared daubed on the walls of the old quarter.

Mallorca authorities have long been battling to clean up the image of the island and appeal more to big spenders and family groups than the badly behaved cheap tourists attracted to resorts like Magaluf.

They have brought in a raft of by laws that saw a ban on drinking in the street, late licensing and happy hours and even brought in British police officers to patrol the streets.

A record 82 million foreign tourists visited Spain last year, with Catalonia and the Balearic Islands – which include Majorca, Menorca, Ibiza and Formentera – being the top destinations.