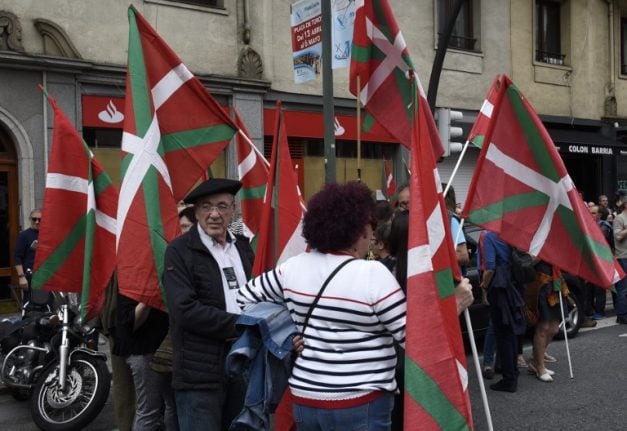 A demo calling for ETA prisonners to be transferred closer to their relatives in the Basque Country. Photo: AFP

Just a five-minute drive away, Encarni Blanco, a one-time collaborator of the Basque separatist group, has struggled to piece her life back together years after she said police detained and tortured her.

Once on opposite sides of the deadly campaign waged by ETA for an independent Basque homeland in northern Spain and southern France, both went through years of therapy to try and come to terms with what happened and move on.

Their individual struggle is a micro-example of what awaits the region as it tackles the delicate balancing act of healing and remembering after ETA's expected dissolution next month. No to hate, resentment

“I was one of the first victims who coexisted with the murderers of my mother,” says Ramos, 44, sitting in a bar which used to be part of the Socialist party headquarters in the industrial town of Portugalete.

Behind him is a mural representing part of Picasso's anti-war painting Guernica complete with “1987” — the year his mother Maite Torrano, an activist of the Socialist party in power in Spain at the time, was killed by separatists who threw petrol bombs inside.

She later died of her wounds, one of at least 829 victims of ETA, a group created in 1959 at the height of Francisco Franco's dictatorship that laid down its arms in 2011.

Not content with having killed his mother, one of the perpetrators taunted Ramos for years after his release from prison, following him in the streets for instance.

While that has stopped, he still sees him often.

“I'll go to the pool, and he'll be in a hammock there… My son will play in the same park as his son,” he says.

With the help of a “great psychiatrist,” Ramos learnt to deal with it.

But while he has yet to tell his eight-year-old how his grandmother died, he has one thing clear — he will never reveal who murdered her.

“I don't want to pass on any hate, any resentment to him.”

He warns though that as more and more ETA prisoners are released after serving their sentences, other victims are going to face the same problem. And they “aren't being prepared for this.”

Ramos himself has put hate behind and participates in regional government or Church-run gatherings where he recounts his experience — part of a process towards reconciliation.

'Shatter as a person'

Some of these meetings gather together victims of ETA and those whose loved ones were hurt or killed by anti-ETA groups like the GAL death squads — later found to be linked to the Spanish interior ministry — or tortured by police.

People like Blanco, 59, who still wakes up with a start when she hears noises at night, years after the Guardia Civil police came for her and her husband in January 1992.

For five days, she was held incognito and says she was hooded, beaten up and given electroshocks, a case she later took to the United Nations which criticised Spain for not investigating it. Encarni Blanco was arrested and tortured by the Guardia Civil police force in 1992 for collaborating with ETA. Photo: Cesar Manso / AFP

“You shatter as a person,” she says, standing next to the entrance of the apartment building in the Basque town of Santurtzi where police came to get her in 1992, and which she eventually left after years of sleeplessness.

“At the end you ask 'what do you want of me. Whatever you want, I'll do it because I want to get out of this hell.' When they said I was going to prison, I was happy.”

She and her husband Josu were sentenced to six years in jail for collaborating with ETA — a fact they don't deny.

Blanco says they had agreed to house ETA members when they were in town, even if that never happened in practice.

But she insists the state should recognise what they did to her and others to move on, speaking on the same day as ETA itself acknowledged the harm done and apologised to its victims — although not to those it considered legitimate such as police.

According to a December report commissioned by the Basque regional government, more than 4,100 complaints of police torture were made between 1960 and 2014.

Gaizka Fernandez Soldevilla, a historian for the Memorial Centre for Terrorism Victims in the Basque capital Vitoria, estimates around 60 people have been proven to have died at the hands of the GAL, para-police or far-right groups.

“That must be told, but you can't put it all on the same level,” he says.

For him, the Basque separatist left-wing movement is trying to portray decades of bombings and kidnappings as a conflict between two belligerent sides to justify what happened.

But for Fernandez, “there was a terrorist group that killed.” He adds it is crucial to teach the past in schools in a country where dark periods of history like the 1936-9 civil war or ETA violence are often skirted over.

Especially given around half of the Basque population wants to “turn the page without having read it first,” according to a survey conducted by the centre.

“Fear of talking politics is still very present in the Basque Country,” he says.

But “if you don't know your history, there is a danger that you will repeat the worst of it.”

And that's where gatherings attended by the likes of Ramos are of double help.

Manu Arrue, a Jesuit priest active in the reconciliation process, recalls one such meeting last year when a woman who attended “talked for the first time of her father who had been killed (in the civil war), of an uncle who is still missing.”

“These meetings help to unite, to build bridges between… all sorts of different sufferings.”