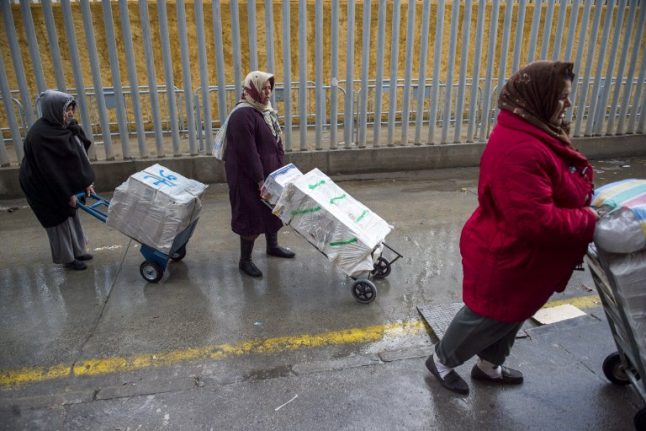 Morocco's mule women have got now got wheels. All photo: Fadel Senna / AFP

For years, thousands of such porters have crossed the border every day into  Ceuta, a Spanish enclave perched on the northernmost tip of Morocco.

But now an initiative aims to ease the burden by encouraging the women —  who are paid to exploit an anomaly in Moroccan law that exempts items carried  by pedestrians from duties — to use trolleys.

“It's less trying than before,” said Najat, one of the porters whose  back-breaking work has earned them the nickname “mujeres mulas” (mule women)  in Spanish.

“It's a good thing, especially for those with health problems,” added the  mother of two, whose husband is unemployed.

On a hill towering above the Mediterranean between Ceuta and the Moroccan  town of Fnideq, Najat, who is in her 40s, waited to pass routine checks at a  small pedestrian border post.

Ceuta emerged as a military and commercial port under Spanish rule dating  back to the 15th century. Today it has a population of around 85,000, enjoying  a degree of autonomy from Madrid.

Najat was equipped with her new wheels.

Welded locally, the device is “much more durable than trolleys sold in the  shops”, she enthused.

For the past five years, Najat has been entering the Spanish enclave twice  a week, arriving back several gruelling hours later with bundles of goods.    She makes around 20 euros ($25) for each round trip, delivering the items  to merchants; approximately the same cost as her new trolley. While goods brought by vehicle from the European Union are subject to  import duties at the Moroccan border, items taken on foot are exempt.

Under pressure from NGOs following a string of incidents, including deaths,  traders and authorities in Ceuta launched the trolley initiative this month,  to complement a raft of other reforms.

At dawn, a group of 100 women were the first to cross the frontier to a  commercial zone just inside the Spanish enclave. The zone was built in 2004 to  reduce congestion in the centre of Ceuta.

“The situation is improving, thank God,” said 35-year old Touria, a scarf  wrapped around her head. She had come to look for food products. Other reforms include a daily limit on the number of porters crossing the  border and alternating days for men and women.

At least four women porters were trampled to death last year, in stampedes  at the border post — the only land frontier between the EU and Africa.

Private security agents have been employed in the commercial zone, paid by  local traders and the authorities in Ceuta.

“We will not see any more shameful images on TV,” said a security guard,  who helps ensure the porters queue for their turn in an orderly manner.

He described the efforts by authorities as “a step” forwards for human  rights.

Scrolling through his smart phone, the burly Moroccan showed what he called  “images of chaos” taken a year ago, that he said he encountered on a  near-daily basis.

“All that belongs to the past,” he said.

But he believes more should be done to help the women. “Now we must reduce  the weight of the parcels.”

The exploitation of porters “began in the early 2000s and hasn't stopped  growing since then”, Mohamed Benaissa, president of the Morocco-based Northern  Observatory for Human Rights, told AFP.

Under heavy rain, Fatima struggled to steer her trolley, piled high with 60  kilograms (130 pounds) of boxes containing a Spanish brand of sweets.

The trolley does not “roll on its own, it must be steered, and it is  difficult on slopes”, she said. The new measure had “changed nothing”.

“Before, I had backache and knee pain, now I have pain in my arms,” said  the Fnideq resident in her 50s, adding she would prefer to work in a factory,  even with lower pay.