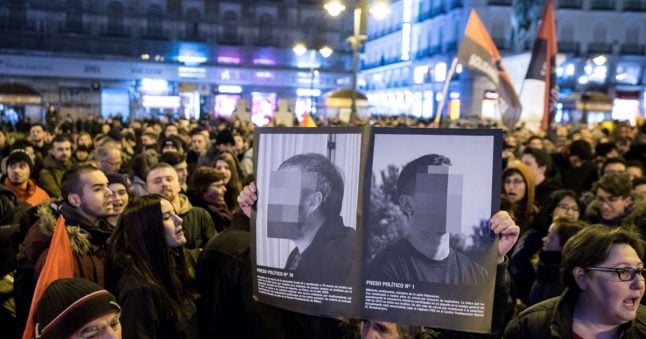 A protest calling for the release of the 'political prisoners'. Photo: Amnesty International

Prosecutors are seeking a total of 375 years in prison for the accused,  aged between 21 and 31 years old, on charges of “inflicting injuries of a  terrorist-nature” and issuing “terrorist threats,” alleging an atmosphere of  constant “harassment and pressure” against police forces in the area.

But the defence argues this was a mere bar brawl in October 2016 in  Alsasua, a town in Navarra, the northern region in Spain that neighbours the  Basque Country and which Basque separatists — including armed group ETA —  have long laid claim to.

The trial comes as critics raise the alarm over what they say is the  disproportionate use of counter-terrorism laws in Spain, just days after a  woman was arrested for “terrorism” in a probe on pro-independence activists in  Catalonia who staged protests, including road blockades.

A judge subsequently released her and dropped the charge, opting for the  lesser offence of “public disorder.”

The two policemen allegedly beaten up in 2016 were off duty and had gone to  the bar with their girlfriends, when they were reportedly set upon by locals  in a fight that saw one of the officers go to hospital with a broken ankle.

In its ruling sending the case to trial, a judge from Spain's National  Court, which deals with terror cases, said that at least two of the accused  were part of a movement seeking to drive police out of town.

These types of movements were actively promoted by ETA when it targeted  Spanish security forces, which it wanted out of what it considered its  “country.”

Ruben Mugica, lawyer for the Covite association of ETA victims that brought  the case to court, said the severe charges were justified by “the context in  which the attack happened.”

He told Spanish radio that the atmosphere “of permanent harassment” during  the decades of ETA's violent separatist campaign was still alive in some  places today.

The defendants, though, deny any form of concerted action, and some say  they did not even assault the policemen.

Amnesty International, meanwhile, said that “while injuring people of  course warrants criminal investigation, charges of terrorism are entirely  inappropriate and must be dropped.”

“This case is emblematic of the dangers that lurk within overly-broad and  vaguely worded legislation, which can be used to criminalise behaviour that is  far removed from any threat of terrorism.”

“This case in #Spain of ppl involved in a bar brawl facing up to 50 years in jail on 'terrorism' charges is emblematic of the dangers that lurk within overly-broad & vaguely worded terrorism legislation” @amnesty's @eda_seyhan as trial of #Alsasua8 begins.https://t.co/nUQGA7HCpe