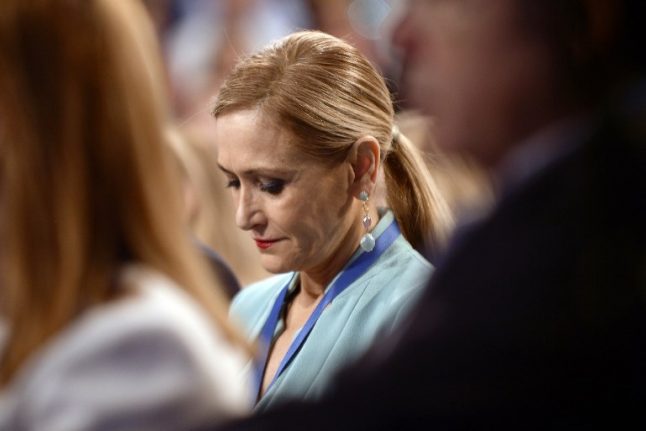 When leading politicians “say they have a masters they should be in a position to guarantee they do and if they say they do but do not … that is grounds to resign,” said the chairman of Spain's conference of university rectors, Roberto Fernandez, without naming Cristina Cifuentes.

Along with the ongoing political stalemate in Catalonia, the issue helped to overshadow a weekend conference of the ruling Popular Party (PP).

The rectors said in a statement if it transpired that Cifuentes' masters award from Madrid's King Juan Carlos University was bogus it would be a very serious matter.

ANALYSIS: How fake degree scandal is provoking a new crisis in Spain's government Cifuentes holding up her degree certificate in a congressional session. Photo: PP

Cifuentes has been caught in a media storm amid accusations she obtained the diploma without taking all the required exams and rarely attending lectures. Further allegations have been made that documents allowing her to receive the diploma were falsified.

The public prosecutor is investigating the claims.

Cifuentes, touted by the PP as a new broom in a party tainted by scandal in recent years, has denied any wrongdoing and refused to resign despite some in her own party opposing her staying in her post.

The PP's centre right ally Ciudadanos, a key backer in the regional parliament, is among those urging her to go while the leftist opposition is preparing a motion of censure.

Prime Minister Mariano Rajoy, who initially swung behind his party colleague, has urged the affair be resolved “as quickly as possible with as much common sense as possible” fearing it could taint PP's image as the government looks to next year's municipal, regional and European elections. But Cifuentes is not the only only one to be tainted in the scandal which stretched also to  Pablo Casado, an MP and the party’s deputy communications chief, who is also now accused of obtaining a master’s degree from the King Juan Carlos University in Madrid without ever attending classes or writing a dissertation.

Bruised, the Popular Party (PP) has over the months lost ground to Ciudadanos, with opinion polls finding the newer, centre-right grouping whose leader is an admirer of France's Emmanuel Macron would get more votes if general elections were held.

At the weekend, the PP held a convention meant to kick off its campaign for municipal and regional elections in May 2019.

In so doing, the party also hoped to close ranks and address the rise of Ciudadanos, Catalonia's drawn-out separatist crisis and the 2018 budget which Rajoy's minority government is not managing to get approved for lack of parliamentary support.

To outsiders, however, the gathering was overshadowed by a scandal involving the PP's regional president in Madrid Cristina Cifuentes — accused of getting a master's degree fraudulently — and Rajoy's handling of the Catalan crisis.