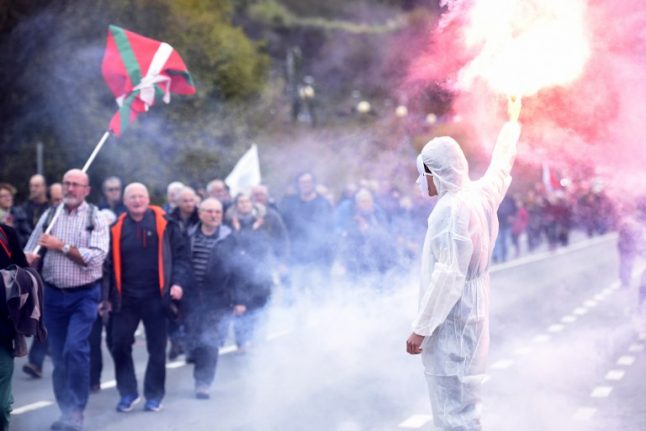 A demonstration demanding the release of prisoners affiliated with the Basque separatist group ETA outside the Martutene prison in San Sebastian on December 31, 2017. Photo: ANDER GILLENEA / AFP
The protracted demise of the group — blamed for 829 deaths during its years of attacks — has stoked tensions as ETA prisoners are released. Nationalists see reintegration into society as a necessary step for cementing lasting peace, whereas victims' relatives are concerned that there should not be a “media show” around the returns, which could be humiliating for grieving families.
Agus Hernan, who heads an association regarded as close to the families of ETA prisoners, told AFP that there will be a definitive and conclusive dissolution “before the summer”. Another source suggested that the end could come as early as next month.
Created in 1959 at the height of the Francisco Franco dictatorship, ETA in fact renounced violence as long ago as 2011 after a succession of broken truces.
On April 8th last year, the group said it was verifiably laying down its arms, providing authorities in neighbouring France with a list of weapons caches.
That has meant that the prospect of fresh terror is a fading concern for 2.2 million Basques, who instead now identify high unemployment as a more pressing issue.
Only one percent of Basques are currently worried about ETA-related issues, according to local pollsters Euskobarometro. But the release of prisoners brings simmering tensions to the fore.
Flowers for killers?
Homecomings see the prisoners welcomed with traditional songs and dancing — while victims' relatives seethe.
“They give bouquets of flowers … to those who killed or helped the killers,” says an outraged Maite Pagazaurtundua, a conservative EU lawmaker whose policeman brother ETA killed in the town of Andoain in 2003.
February saw two alleged accomplices of that murder return home to great ceremony — an insult to the dead, according to victims' associations. The friends and families of those released insist that it is “normal” to throw a welcome home party for loved ones often jailed in far-flung corners of Spain.
The problem now facing both sides is how to exist peacefully side by side in the future, with Agus Hernan's association involved in moves to bring about a reconciliation.
His association has highlighted the successive steps of “disarmament, demobilisation, reintegration” to draw a parallel with the process undertaken in Colombia by the FARC guerrilla movement.
But for many Spanish conservatives, the ETA simply remains a group of “terrorists”.
“Terms such as demobilisation or dissolution matter little to us. What counts is that it is clear when that day comes that ETA will have disappeared” for good, Jonan Fernandez, secretary general for peace and coexistence in the Basque regional government, told AFP.
Respect for the victims
Hernan says ETA still has some 300 members jailed in Spain, France and Portugal, while between 85 and 100 are fugitives with around a dozen more “expelled from France, without papers, to Africa or Latin America.”
Pagazaurtundua argues that, “out of respect for the victims,” whose trauma lives on even now the violence is over, reintegrating prisoners should not entail a “media show”.
She adds that “we want (ETA) to condemn the history of terror, not simply ask for forgiveness”.
Spanish Interior Minister Juan Ignacio Zoido said last week that “whatever ETA does… killers are those who kill.”
As to whether Basques believe released ETA members should be seen as having paid their dues, latest Euskobarometro polls show 45 percent support measures designed to facilitate social reintegration for those who show public remorse.
By AFP's Michaela Cancela-Kieffer