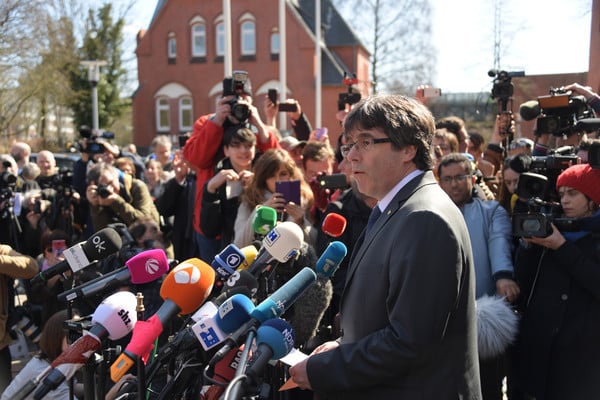 Puigdemont addressed the media after leaving a German jail on Friday. Photo: Axel Heimken/DPA
The German court had issued the preliminary ruling on Thursday, refusing Spain's request to send Puigdemont back to be judged for rebellion over his role in the region's failed secession bid last October.
But in a rare statement on a foreign court's decision, the Spanish office said it was “certain” that the German court's final ruling will respect the principle of “mutual recognition” of judicial decisions that is inherent in the European arrest warrant system.
“In any case, the prosecutor's office will study the possibility of exercising the relevant actions to protect and defend the European legal order… before the European Court of Justice,” it added.
Based in Luxembourg, the European Court of Justice enforces the law of the 28-nation European Union.
The German court ruled that rebellion was not punishable under German law, and the closest equivalent, high treason, did not apply because Puigdemont's actions were not accompanied by violence. But the court is still to decide whether to send the former Catalan president to Spain to face trial for alleged misuse of public funds.
Even if he is extradited on the lesser charge, the German court's refusal to accept the rebellion charge means under European law Puigdemont cannot be prosecuted in Spain for the offence, which several Spanish law professors and rights groups have called extreme.
A senior judge close to the case told AFP before the statement was released that a “protest note” was being prepared in response to the German court's decision.
The court was “undermining European judicial cooperation”, the judge said, adding that it was up to Spain's Supreme Court “to interpret the concept of violence” in this case.
The Supreme Court also said in a statement that its judge Pablo Llarena, who is in charge of investigating the role played by Catalonia's separatist leaders, was considering consulting the European Court of Justice on the procedure for extradition among EU member states.
Puigdemont walked out of a German prison on Friday following the ruling, calling for “political dialogue” with Madrid to resolve the row over the region's independence bid.