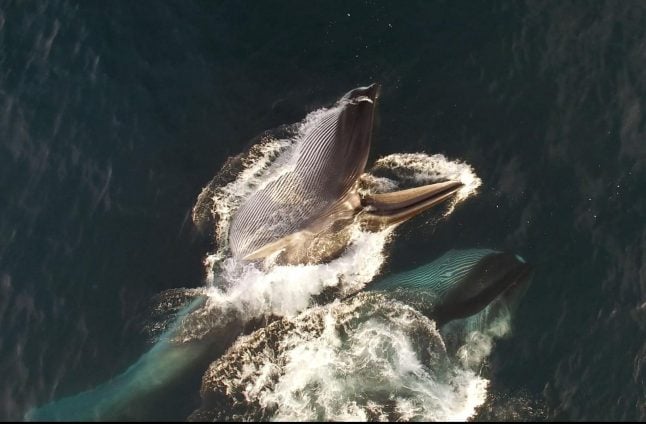 The amazing footage was recorded by EDMAKTUB off the Catalan coast. Photos: EDMAKTUB

The beautiful images show two adult fin whales rising to the surface, turning on their sides and speeding up while opening their vast mouths to trap several tons of water.

The water swells their bodies from the jaw to middle section, then the close their mouths and expel the water through their baleen plate, filtering out food which they then swallow.

Within seconds, the body returns to its usual slender form.

The video clip shows the whales repeating the same behaviour up to six times and provides the marine biologists with a rare insight into their behaviour.

“This is that the first time that aerial images have been recorded showing this behaviour on the part of the species (Balaenoptera physalus),” said Eduard Degollada, President of EDMAKTUB, and head of the Fin Whale Project, which has been studying these marine mammals off the Catalan coast since 2013.

“In addition to the extraordinary quality of the images, this video is also of great scientific importance. It provides valuable information regarding how these animals feed, which will allow us to better understand their diet as well as their behaviour,” he said.

The images were recorded off the coast of Garraf, just south of Barcelona where numerous whales have been sighted feeding over recent days.

The area if the Mediterranean between the Catalan coast and the Balearic Islands is a popular feeding ground for fin whales during spring.

As well as recording the drone footage on Thursday, the group spotted a pod of ten whales feeding in the same area.

The fin whale is the second largest animal in the world after the Blue Whale, and can grow to lengths of above 24 meters (79 ft). The WWF classifies the fin whale as an endangered species with a population estimated at between 50,000-90,000.

This map shows sightings of fin whales off the Catalan coast last year: