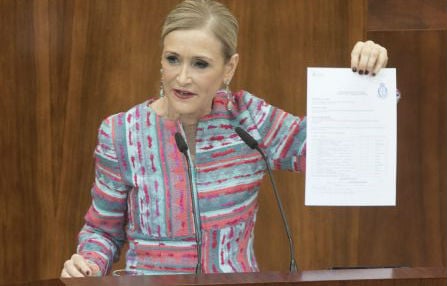 One is the release without charge of Catalan independence leader Carles Puigdemont by German authorities, when Spain had asked for his extradition.  The other is a scandal of a missing master’s degree claimed by the Madrid Autonomous Region’s First Minister, Cristina Cifuentes.

The disappearing degree might have been a tempest in a teapot if Cifuentes had simply confessed to a fabrication.  But after maintaining silence for nearly two weeks, on April 4th she appeared before a special session of the Spanish parliament, where she loudly and forcefully announced that she had done no wrong, was the victim of a witch hunt and that her personal honour was been impugned by the media.

By proclaiming that she in fact did do the coursework for the degree (although she admitted that she never went to class nor took the required exams), did write the required master’s thesis (which neither she nor the King Juan Carlos University can find), and did defend her work before an examining board (the members of which say never existed and never met), she has backed herself – and the PP, of which she is a leading light – into a very narrow corner.

After Wednesday’s session members of her party were the only voices in parliament to support her version.  But within the past 48 hours, new evidence has been uncovered that has made it very difficult for any member of the PP, including Prime Minister Rajoy, to back her.

On Thursday, 5th April, the rector (equivalent to vice-chancellor) of the King Juan Carlos University said that the entire matter of Cifuentes’ master’s degree was being put into the hands of the justice authorities, “because there are indications of illegality,” involved. That same day, the online newspaper elconfidencial.com revealed that the signatures on the official document attesting to Cifuentes’ successful defence of her thesis, were falsified.  The next morning, the secretary of the examining panel confirmed that this was true, and that the panel had never met.

The latest in a long list of damning revelations came this morning with the explanation by the head of Cifuentes’ master’s degree program, Enrique Alvarez Conde, that he had been ordered by the university’s rector, Javier Ramos, to “fix this situation,” and produce an official document attesting to Cifuentes’ successful defence.

Alvarez Conde ordered a colleague, whom he called a “disciple,” to produce this document with the necessary signatures.   He then turned over the document – which he called a “hypothetical re-construction,” to the rector. The document then reached Cifuentes, who used it in her impassioned defence in Parliament.

The First Minister now finds herself in a nearly-indefensible position.  The Spanish Socialist Workers Party (PSOE) has filed a motion of censure and the motion is backed by the far-left Podemos (“We Can”) party.

Both PSOE and Podemos have called for her resignation and several of Cifuentes’ colleagues have stepped back from full support and refused to comment on her situation, or to speculate on her future.

As Cifuentes looks more and more like a millstone around the neck of her party, the PP national conference begins this afternoon in Seville.

Cifuentes has already cancelled the speech she was to have given today, and there is speculation that she will do the same for Saturday’s scheduled talk, or that the PP will cancel it for her.

Members of the Partido Popular are especially exasperated that the positive attention they had hoped to draw to the gains in employment and in the Spanish economy under their government, will now be directed solely at the Cifuentes matter.

The affair is not simply about losing one of the top politicians in the PP, to whom the leadership had entrusted the all-important district of the Madrid region.  The Madrid city government is already in the hands of the hard left, a grouping of anarchists, communists, anti-capitalist and anti-system movements, and the fear is that, with this scandal and the possible departure of Cifuentes, the Podemos movement may be able to spread its power more widely through the Madrid region.

This would make the PP’s governing position even more precarious, as it is losing ground rapidly in both votes – dropping from 11 deputies to 4 in last December’s Catalan elections — and in opinion polls, where it is being overtaken by its centre-right rival, the Citizens Party (CP).  The PP holds only a plurality in the Spanish parliament, and governs with the support of the CP.  If that support were withdrawn, gridlock would result.  Spain recently went 10 months unable to form a government, and few would want to see that situation repeated.

Article contributed by Aden Hayes. In addition to his freelance writing on politics, travel, literature, and track and field athletics, Hayes is an administrator in international higher education.  He has lived and worked in Madrid for nearly three decades.