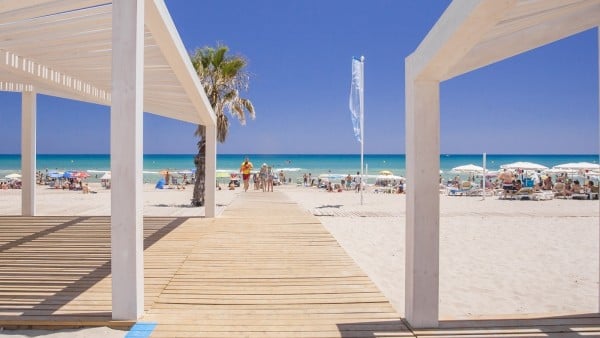 The boy died whilst playing on the beach in Orihuela. Photo: AJUNTAMENT D'ALACANT

The town hall said the boy had collapsed while playing with friends and despite enormous efforts to revive him, had died 24 hours later in Alicante hospital.

Officers from the Local Police and Guardia Civil arrived at the scene within ten minutes of the incident and attempted CPR until an ambulance arrived, said a statement from Orihuela town hall.

Paramedics were able to resuscitate the boy after nearly an hour and he was taken to the  Hospital Quirón in nearby Torrevieja and then transferred by helicopter to General Hospital in Alicante, where he was placed in a medical-induced coma.

But he died on Wednesday afternoon.

The boy and his family who are originally from Britain, were permanent residents in Orihuela-Costa.

Local reports claimed the boy had been forced to wait 40 minutes for a properly equipped ambulance – one with a defibrillatoron board –  to arrive and questioned why there were no trained lifeguards on duty.

Orihuela council admitted that the life guard service had been in place over Easter week but had come to an end on Easter Monday, a day before the accident.

The statement read: “Orihuela Town Hall wishes to express its utmost condolences over the loss of the child, of British origin, as a result of a collision with another youngster.

“Attempts were made to revive the boy before local police arrived on the scene 10 minutes after the incident with a Civil Guard patrol.

“Those attempts continued both after the police arrived and the two ambulances arrived, one a basic life service ambulance and the other an ambulance belonging to the Valencian Health Service.

“Health professionals managed to stabilise the youngster who was transferred to Quiron Hospital in Torrevieja before being taken by air ambulance to Alicante General Hospital.

“The incident happened during medium season and the coastal lifeguard and rescue service had ended after Easter on April 2.

“We deeply regret the youngster’s loss and offer our condolences to his family.”