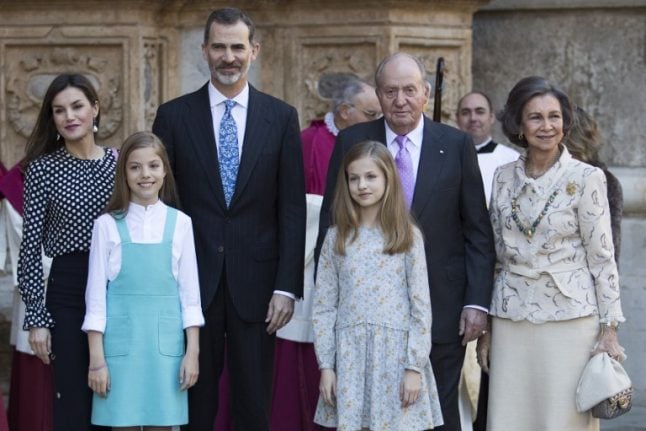 The family group posed happily for photos outside the cathedral. Photo: AFP

This was the tricky scenario at the traditional Easter Sunday mass in the cathedral in Palma de Mallorca, when the three generations of royals appeared in public together for the first time in a long while.

But a video that emerged on Tuesday showed the tensions that bubbled to the surface during the public outing.

Just as Queen Sofía clasped her granddaughters to her side for a photograph in church, her daughter-in-law Queen Letizia appeared to block the shot and attempted to wrench her daughters from their grandmother’s grip.

As the scene unfolded, Princess Leonor, the heir to throne, seemed to have enough of both and shrugged them both away.

King Felipe attempted to smooth things between his wife and mother and exchanged words with both, while the King Emeritus looked on bemused.

The video of the incident spread like wildfire across social media, receiving more than two million views within 24 hours.

The video made headlines in Spanish news outlets, with El Pais branding it “tense”  while El Mundo labelled it a “Rifferafe”. Morning chat shows were devoted to analysis of the incident.

It even prompted a relative of Queen Sofia to enter into the fray.

Princess Marie-Chantal of Greece, whose husband Crown Prince Pavlos is Sofia of Spain's nephew tweeted: “What is the Spanish press saying? This is so awful. This makes me feel so angry! No grandmother deserves that type of treatment! Wow she's shown her true colours.”

No grandmother deserves that type of treatment! Wow she’s shown her true colours