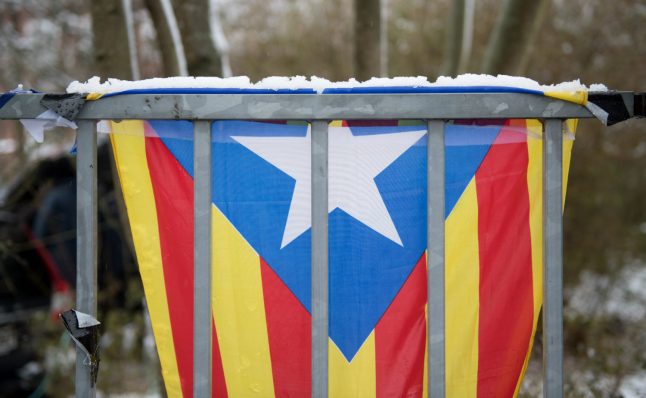 An Estelada flag on a fence in Neumünster, Germany, where Carles Puigdemont is currently detained. Photo: AFP

Here is what could happen:

Puigdemont had abandoned his bid to return to power while in exile in an attempt to unlock the political impasse.

But separatists on Wednesday passed a symbolic resolution demanding to elect the ousted president as leader, despite his detention, showing they are not ready to give up on him.

Spain's Constitutional Court ruled that a candidate must be present at the regional parliament to be officially appointed.

But big splits have opened in the separatist camp. Puigdemont's conservative party, the PDeCAT, is divided between supporters of the ex-leader and those want to form a government as soon as possible, to regain autonomy after five months of direct rule by Madrid.

The other main independence party, ERC, whose leader is in jail, wants to avoid a new confrontation with Spain which would worsen the situation of detained separatists.

“They want to show that they tried by all means to invest Puigdemont without seeing any more people go to jail,” said analyst Antonio Barroso of Teneo Intelligence.

ERC president Oriol Junqueras is one of nine pro-independence leaders in prison, while seven others have fled abroad to avoid facing serious charges over their role in Catalonia's independence push in October 2017.

All eyes on Germany

Puigdemont's fate rests in the hands of Germany, which has to decide whether to extradite him to Spain.

“Whatever the decision, you can't escape the reality that Puigdemont cannot be elected president,” Barroso said. “But nobody wants to be accused of backtracking.”

Party insiders concede it is unlikely that Puigdemont will return to Catalonia's helm.

“We just need to support him a few more weeks, after all, our campaign promise was Puigdemont for president. But we'll have to give up on that at the last minute,” a PDeCAT source told AFP.

Puigdemont's extradition could play into the hands of hardline Catalan separatists seeking to take advantage of the void left by the independence movement's decapitated leadership.

“The jailings have had an emotional impact and spurred radicalisation,” said Catalan political expert Gabriel Colome.

Fresh regional elections will be triggered if Catalonia's parliament fails to elect a leader by May 22nd — the third potential ballot in three years.

Puigdemont's supporters seem increasingly in favour of new elections, which could offer them a way out of the dilemma.

“Their game plan is to finish with those seeking compromises (with Spain) on the one hand, and finally attend the long-desired 50 percent of the votes,” according to expert Oriol Bartomeus.

The separatist bloc, made up of several parties, won regional snap elections in December called by Madrid.

But they failed to reach an absolute majority of voters backing independence.

However, a return to the polls is not guaranteed to solve the crisis, with Catalans almost evenly divided between pro-independence and pro-union supporters.

Some anti-independence politicians have proposed alternative alliances including the separatist parties' most pragmatic elements, while others suggest a national unity government.

None of these are realistic options, said Barroso, the analyst.

“Given that they can't do anything, they're trying to come up with creative ideas,” he said.

READ ALSO: The Puigdemont files: what you need to know about the case