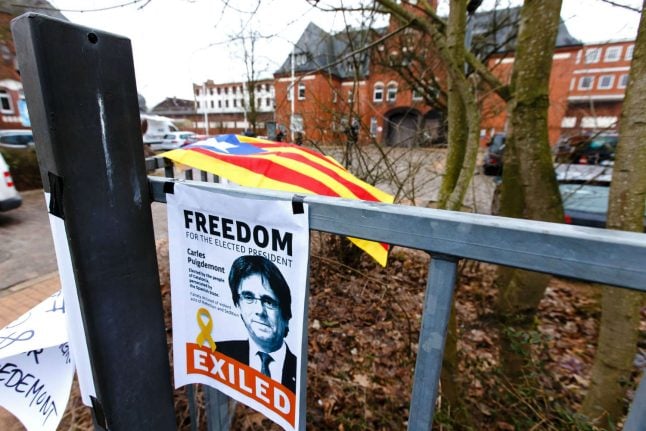 A poster in front of the prison in Neumünster, northern Germany, where Carles Puigdemont is detained. Photo: AFP

National police arrested the two agents from the Mossos d'Esquadra, or Catalonia's regional police force, in Barcelona on Wednesday “as part of an investigation for the crime of harbouring a criminal,” the force said on Twitter without giving further details.

Spanish media said one Catalan police officer was arrested at Barcelona's El Prat airport after he arrived on a flight from Brussels while the other was taken near his home in the coastal town of Vilassar de Mar, northeast of the Catalan capital.

A history professor who was also in the car with Puigdemont at the time of his arrest was also detained on Wednesday on the same charge, public television reported.

Acting on an international arrest warrant issued by Spain, German police arrested Puigdemont on Sunday after he arrived from Denmark en route back to Belgium where he has been living in self-imposed exile since the Catalan parliament declared independence in October.

His arrest came two days after Spain's Supreme Court ordered Puigdemont and 24 other Catalan leaders to stand trial for rebellion, misuse of public funds, and disobeying the state in Catalonia's separatist push, including holding a referendum on independence on October 1st despite a court ban.

Puigdemont's detention triggered demonstrations on Barcelona's streets on Sunday that left around 100 people lightly injured in clashes with riot police.