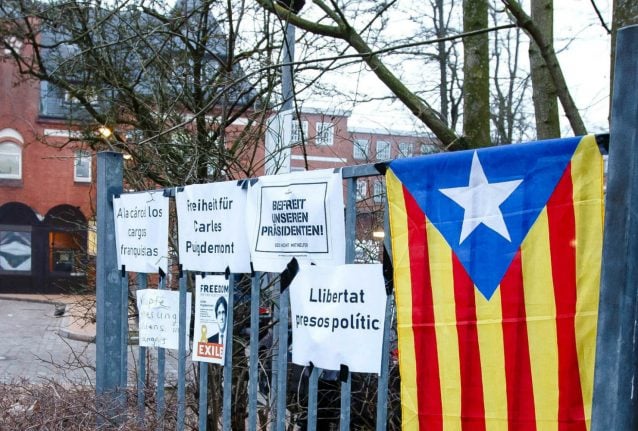 'Free our president' reads a sign in Catalan from a Puigdemont supporter in front of the jail where he is detained in Neumünster. Photo: DPA

On Sunday, former Catalan president Carles Puigdemont was detained at the Danish border by German police – acting under an arrest warrant from Spain – as he tried to make his way back to Belgium, where he had lived in self-imposed exile for the last five months.

Puigdemont fled the Spanish autonomous region after the Spanish Constitutional Court did not recognize the results of a referendum he declared to separate it from the rest of Spain. Spain pointed out that the vote was in direct violation of the Spanish constitution.

Now Germany is deciding if it will send Puigdemont to Spain – and when.

Who is deciding on the case?

The Higher Regional Court in the German town of Schleswig – consulting with federal authorities – will decide whether to extradite Puigdemont. On Friday, Spain reissued an European Arrest Warrant – which typically hastens the process of deciding whether to extradite a citizen of an EU member state.

What are they deciding?

Prosecutors in Germany are exploring whether there are valid legal reasons to block Puigemont’s extradition.

Both German and Spanish law deem it illegal to defy the constitution or “the territorial integrity of the state,” reported Spanish newspaper El País in an article on Monday about the proceedings.

Legal expert Martin Heger told Spiegel on Monday that for Germany to extradite Puigdemont, one of the offences for which the EU member state is requesting extradition would also have to be punishable under German law. In this case, that shared offence is the misappropriation of public funds.

Authorities will also examine the German penalty code, says Heger, which in Paragraph 81 states that “high treason” is a punishable offence. They will compare it to Spanish law, which deems rebellion to be an offence as well. If they decide that the two are the same under both legal frameworks, then they would also have the grounds to extradite Puigdemont.

The Regional Court will also consider whether Puigdemont will remain in custody during the proceedings. While it’s possible that he could be granted bail, he would be required to remain in Germany under a provisional measure issued by the court.

When are they going to decide?

A judicial decision on the case this week is considered highly unlikely. In fact, due to its complicated nature, it could drag on for weeks.

Under German extradition laws, the case would need to be resolved within 60 days, according to Heger.

If the court decides in favour of extradition, it would need to take place within ten days. However, the process could be delayed if Puigemont’s lawyers in Germany argued for humanitarian reasons against his extradition. In case of any delay, Germany would be required to inform Eurojust, the European cooperation office.

Rulings can be delayed for quite some time. In May 2016, the UK called for the extradition of four German men for rigging interest rate benchmarks at Deutsche Bank AG. On Friday, a Frankfurt court blocked their extradition.

What happens if they extradite him?

While Puigdemont has the possibility to apply for political asylum in Germany, he does not plan to do so, his lawyer Jaume Alonso-Cuevillas told Catalonia’s Rac1 Radio.

If the Catalan is extradited to Spain, he faces charges of rebellion, which under Spanish law carries a sentence of 25 years, as well as sedition and misuse of public funds. Spain states that Puigdemont violated Article 155 of the Spanish constitution by calling for an illegal referendum in October 1st.

If he is not extradited, says Heger, he will essentially be a free man – able to travel anywhere within Germany and the EU.

Most leaders of the Catalan independence movement remain behind bars. But it is likely that Catalans will continue to take to the streets in protest, as they did on Sunday evening following Puigemont’s unexpected arrest.

Is he likely to be extradited?

Bundestag Vice President Claudia Roth said on Tuesday that the German judiciary would extradite Puigdemont to Madrid, “only if such an extradition was in compliance with European and German law.”

However, Germany has a history of green-lighting extradition, especially to countries with which it has close partnerships. In 2015, the country detained a total of 1,635 people wanted by other countries and extradited 1,283 of them, reported El País on Tuesday.