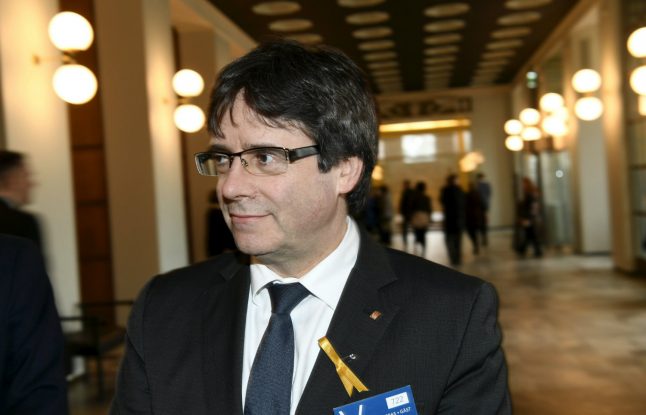 Puigdemont, who lives in self-imposed exile in Belgium, had been visiting Finland since Thursday for talks with lawmakers.

Tensions are running high in Catalonia and separatist parties have abandoned plans to name a new president following the arrest of the latest candidate.

“I confirm that President Puigdemont is no longer in Finland,” his lawyer Jaume Alonso Cuevillas tweeted Saturday, without stating where the former leader was.

Finnish MP Mikko Karna, one of the ousted leader's hosts in Finland, also said he had “received information that Charles Puigdemont departed from Finland yesterday evening by unknown means to Belgium,” in a statement posted on Twitter on Saturday.

“Puigdemont confirmed to me today that in Belgium he will fully cooperate with authorities,” Karna wrote, after earlier telling media that he had not been in touch with him since Friday.

Puigdemont is wanted by Spain on charges of “rebellion” and “sedition”.

Spain on Friday also issued international arrest warrants for five other separatists, including four former ministers who are also in self-imposed exile in Belgium.

Separatist parties won regional elections in December called by Madrid after they attempted to secede and retained their absolute majority in parliament.

But they have still not been able to form a government and face growing legal pressures that have seen many moderate their tone.

With numerous leaders abroad or in jail, the separatists have struggled to re-organise or even remain in politics.

Finland's National Bureau of Investigation (NBI) confirmed earlier Saturday that it had received a European arrest warrant for “a Spanish citizen visiting Finland”, but did not know the person's whereabouts.

“We've had no contact with the person himself or his assistants,” NBI criminal inspector Hannu Kautta told AFP.

Puigdemont's lawyer had earlier told Catalunya Radio his client would not try to escape arrest.

“When the European arrest warrant was issued (a first time), he made himself available to the Belgian justice and police, and he would do the same thing now. I have not spoken to him yet but that is clear, yes,” Cuevillas said.

Meanwhile in Barcelona, the Catalan parliament suspended its debates on Saturday after regional presidential candidate Jordi Turull, who had been due to seek a second-round vote in the parliament, was placed in custody over the region's breakaway bid.

“The presidential candidate of the Generalitat (Catalan executive) is in prison with other lawmakers of this chamber,” Catalan parliament speaker Roger Torrent said at the start of Saturday's session, which had been aimed at electing a new regional leader.

“It's clear that under these circumstances the session cannot take place.”

It is the third time that the parliament has been unable to nominate a new president, after Puigdemont and another pro-independence leader, Jordi Sanchez, who is currently in jail, were forced to withdraw their candidacies.

If a new president is not elected by May 22nd, fresh elections will be triggered.

As long has it does not have a government, Catalonia will remain under direct rule from Madrid, imposed after the independence declaration in October last year.