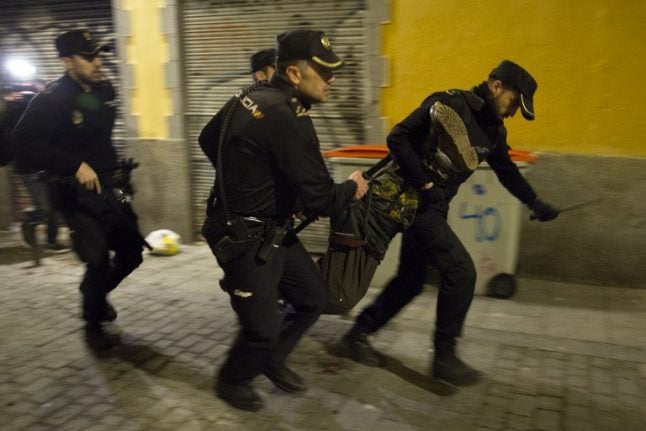 The incident sparked violence against the police, according to the union. Photo: AFP

The controversy has taken centre stage in the Spanish capital, with the ruling conservatives accusing the left-wing politicians, one of them a Madrid councillor, of stirring up discord while street vendors insist Mame Mbaye Ndiaye died after a police chase.

Mbaye, in his mid-thirties, collapsed in the central district of Lavapiés on Thursday and emergency services were unable to resuscitate him, saying he had died of cardiac arrest.

One of many street vendors who illegally sell items like perfume or hats to try and make a living, reports emerged he had been intercepted by police along with others in the central Puerta del Sol square and chased down the streets.

Rommy Arce, a councillor, likened Mbaye's death to that of a Dominican woman murdered in 1992 in Madrid by a police officer.

Furious, street vendors and others gathered in Lavapiés at night in what turned into a violent clash against security forces, with dustbins and bikes set alight.

READ; What the death of a street vendor tells about Madrid's Lavapiés

But police deny this version of events.

One of their unions has filed a legal complaint against Monedero, Arce and Malick Gueye, a spokesman for a street vendors' association, said Esteban Tejedor, in charge of judicial services at the Municipal Police Union (UPM).

It accuses them of a “hate offence against police,” he told AFP Tuesday.

Mbaye “wasn't being chased from Sol. He was walking, he joined a friend and he was going home because he said he wasn't feeling well,” Tejedor said.

Police officers on patrol were called on to help when he collapsed and tried to resuscitate him before emergency workers arrived, in vain — a claim backed up by city councillor Javier Barbero in a Friday press conference.

“One of the things we're denouncing is that the city hall knew about these facts way before the press conference,” said Tejedor.

Tejedor acknowledged there was a police intervention in Puerta del Sol, but said Mbaye wasn't there.
This, however, is contested by fellow vendors.

Members of the vendors' association told reporters on Tuesday the victim was on the square when police intervened and ran away along with others before heading to Lavapiés.

The tragedy has shone the spotlight on migrants' tough living conditions in Spain.

Barbero on Friday called for reflection on “the way they experience daily situations of fighting for survival… with the constant fear of being arrested.”