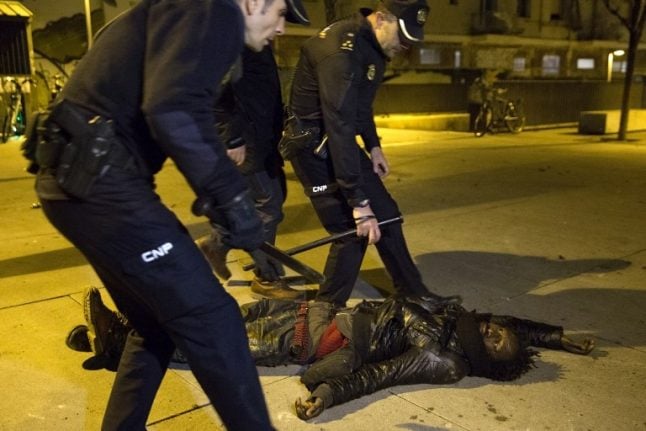 Police were accused of heavy handedness during the disturbances in Lavapiés. Photo: AFP

You feel a true sense of community when walking down Calle Argumosa, past the metro station and up towards the plaza where the West African migrants meet up with their friends.  But this multicultural oasis in the heart of the Spanish capital exploded in rage last week as one of the local residents died. Bins were overturned, cars were trampled on and bikes were burned when disturbances broke out after Mbaye's death. Photo: AFP

Lavapiés is a diverse area of Madrid, where people from five different continents coexist in harmony and respect for each other.  But that peace was disrupted last week when Mmame Mbaye, a Senegalese who lived in Madrid for 14 years, died of a heart attack last Thursday, March 15th.

It was reported that police allegedly chased the 35-year-old from Puerta del Sol to the Lavapiés neighbourhood of Madrid where he collapsed.

It has since emerged that police claim a patrol went to his aid after he was found on the street in Lavapies suffering an epileptic fit and that he died of a heart attack while emergency services were attempting to treat save him.

Whatever the true facts surrounding Mbaye's unfortunate death, it sparked violent protests that highlighted the simmering tension between an immigrant underclass that feels outside of society and persecuted by the police.

What is undisputed is that in an effort to stop the illegal sale of fake branded products, police vigorously and aggressively confront street hawkers – known as manteros because of the manner in which they display their goods on blankets (Mantas)and scoop them up to flee when police approach.

The majority of the street vendors in Madrid are economic migrants from West Africa.  They arrived in search of better economic prospects, but when I lived in Lavapiés and talked to these migrants, there was an overwhelming feeling of frustration: they simply could not access the job market. They did not come to Spain to sell football shirts and selfie sticks to uninterested tourists.  They came to improve their lives and do so by working and contributing to the Madrid economy.

Instead they are confronted with institutional racism and immigration bureaucracy making formal employment almost impossible.  Street vending becomes the only reality to earn money and support family members back home.

Street vending in Spain in punishable by fines, community service and even imprisonment. When not selling their products manteros, who are predominantly male, congregate around La Plaza de Lavapiés.

This usually leads them to being harassed by police who seemingly have a permanent presence in Madrid’s most multicultural barrio.  This cat and mouse between police and migrants generates animosity, one that erupted into open violence after news broke of the death of Mbaye.

The most ethnically diverse barrio in Madrid, where curry houses neighbour tapas bars was on Thursday night and again Friday the scene of a riot.

The heavy-handed police response was typified by a video released on twitter of a bystander being hit by police and continuously beaten after he fell to the ground.

The catalyst of these protests, the chasing down of Mbaye by police, is not an isolated incident as police are increasing their presence in key selling areas like Sol and Callao.  The criminalisation of the seller and not the buyer highlights the discrimination of a migrant population stuck in a cycle of informal work.

On many occasions when I have been bought items from manteros, they have had to make a swift exit as police cars roll up, yet as a purchaser I was free to continue my commute via Atocha station.

It is no coincidence that the street vendors hassled by police in Sol, live in the vibrant and energetic Lavapiés.

Police want them to leave the area with the recent pressure on manteros living in Lavapiés a tactic to push out labour migrants and isolate populations in preparation for gentrification.  La Latina, an area just north of Lavapiés has already gone through this gentrification.

This is now a very high rent area filled with tourist bars and a watered down demographic of middle class Spaniards.  This it seems is the future of Lavapiés if gentrification succeeds.

Opposition from residents is strong and growing however.  Proposals to build a hotel in the heart of Lavapiés have been met with strong protest and community action.  There has also been opposition to the growing use of AirBnb, which is creating a shortage of apartments and further pushing up rent prices.

Lavapiés is characterised by its shared urban gardens, public art installations and thought provoking murals, but this area is now at serious risk of becoming neutralised.  The eclectic mix of people that make Lavapiés an exciting culturally dynamic residential area are likely to be depopulated and marginalised, making way for a demographic that can afford the increased rents. The annual success of the Tapapiés Ruta Multicultural (multicultural tapas and music street festival) is evidence of how sustainable and attractive Lavapiés is, as it continues to draw in tourists with its array of different tapas from traditional Spanish to Senegalese.  Offering a range of eateries in the city that is possibly second to none.

For Madrid to continue to benefit from the rich diversity of different people and cultures in this proud multicultural barrio, there needs to be a shift from corporate gentrification to inclusive urban development.

But first, a dramatic revaluation of policing attitudes towards migrants, respect the manteros. “Manteras lives matter”: Street vendors march with a banner during a  a rally in memory of Mbaye held in Barcelona.Photo: AFP

Leo Wiggen-Bush is a graduate of International Development Studies with Spanish from the University of Chester, and spent a year living in Lavapiés. Follow him on Twitter and read his blog.