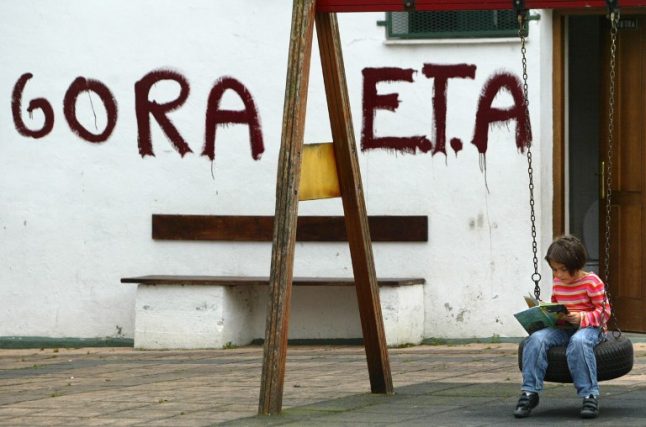 Graffiti glorifying ETA on a wall in the Basque country. Archive photo: AFP

News of the detentions comes as controversy mounts in Spain over public tributes to former ETA members who are feted in their villages after their release from jail, angering relatives of the militia's victims.

“Three people were arrested by the Civil Guard (police force) for their participation in acts of homage to a late ETA member,” Interior Minister Juan Ignacio Zoido told reporters.

He added they were held on suspicion of “glorifying terror” for paying tribute to Belen Gonzalez Penalba, known as “Carmen”, a police statement said.

“Carmen”, a leading ETA member, was arrested in 1999 in southwestern France on suspicion of being tied to at least four murders.

She had been a member of the “Madrid commando,” tasked with bloody attacks in the Spanish capital in the 1980s.

She had also been an ETA negotiator twice in peace negotiations in Algeria in 1989 and again in Switzerland in 1999.

She died from cancer in November aged 59.

ETA, accused of killing more than 800 people in a decades-long campaign of bombings and shootings to establish an independent Basque state in northern Spain and southern France, announced it was disarming in April 2017.

Basque newspaper Gara, which has traditionally been ETA's mouthpiece, said in February that the group had put its proposed dissolution to an internal vote.