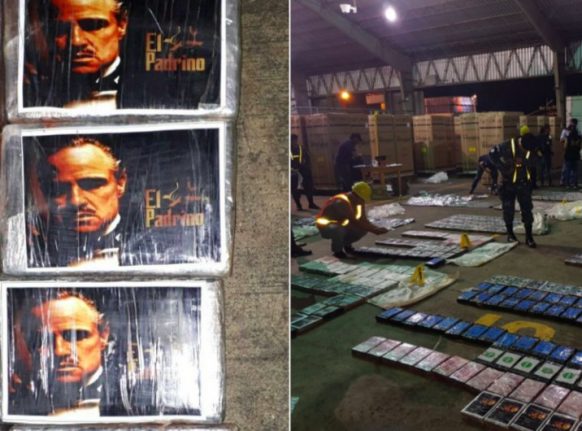 "The drugs were to go first to Spain and from there to other destinations in Europe". Photo: Twitter

Police seized two tonnes of cocaine at a warehouse in Lisbon and around half a tonne hidden as it was being transported by car just across the border in the Spanish province of Badajoz, Portugal's narcotics police chief, Artur Vaz, told a news conference.

The cocaine was inside vacuum sealed bricks contained about one kilo each that were decorated with the logos for Rolls-Royce and Mini vehicles as well as the logo for 1972 crime film “The Godfather” alongside an image of its star, Marlon Brando.

The following January 30th tweet by Guatemalan media group Emisoras Unidas shows that other cocaine bricks with the classic mafia film label on them have been previously seized by international police.

“The drugs were to go first to Spain and from there to other destinations in Europe,” said Vaz.

The authorities declined to give an estimate for the street value of the cocaine, which was put on display for the media at Portuguese police headquarters in Lisbon.

The smuggling ring was based in Madrid and it was “completely broken up” by the operation, he added.