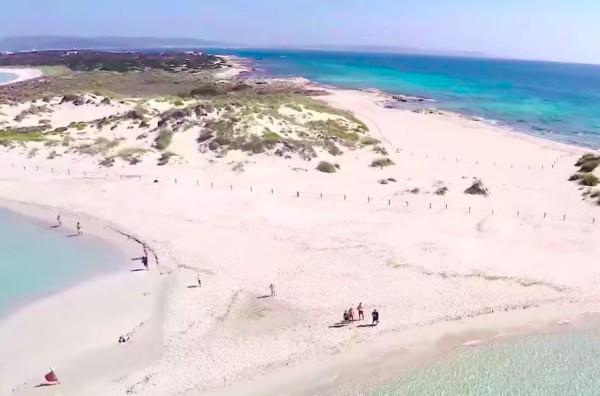 The family says the island is “for their own use”. Photo: YouTube
Anyone who’s lived in the Balearic Islands or has been there on holiday may have gone on a boat tour to the tiny islet of s’Espalmador.
A literal stone’s throw from the most northerly coast of Formentera – 150 metres to be exact – this sandy outcrop is only 3 kilometres in length and 800 metres in width, and can actually be reached on foot from its big brother when the tide is low.
Up until now, the island has received plenty of visitors thanks to its calm turquoise waters, pristine beaches and famed mud bath. Even Prince William and Paris Hilton are reported to have taken a dunk in these murky waters.
But that could all be about to change now that an unnamed family from Luxemburg has paid an eye watering €18 million to have it “for their own use”.
The previous owners were Catalan arquitect Norman Cinnamond and his sister Rosy, whose British ancestors bought the islet in 1932 for just €255.
The Cinnamonds actually offered it up to the Formentera government when making it known to them that the island, along with their thirteen-bedroom house, was on sale.

But after their appeal for state funds from Spain’s central government fell on deaf ears, s’Espalmador was put on the market and promised to the highest bidder.
“Like the majority of people from Formentera, we would’ve preferred for local government to have reached an agreement to use state funds to buy s’Espalmador and make it available to the general public,” Silvia Tur, member of Gent per Formentera (People for Formentera party) told online Spanish daily Voz Populi.
At least environmental authorities will be able to keep a watchful eye over the islet’s new owners as s’Espalmador is inside the Salinas National Park, a protected area.
The unnamed Luxemburgish family will be held responsible for the upkeep and maintenance of the islet, cited by the Cinnamonds as the main reason for their departure.
It remains unclear whether the new owners will allow tourists on to s’Espalmador, or if they have the authority to ban visitors, but their conservation efforts may well be a lot easier without the thousands of beachgoers the islet gets every year.
Url copied to clipboard!