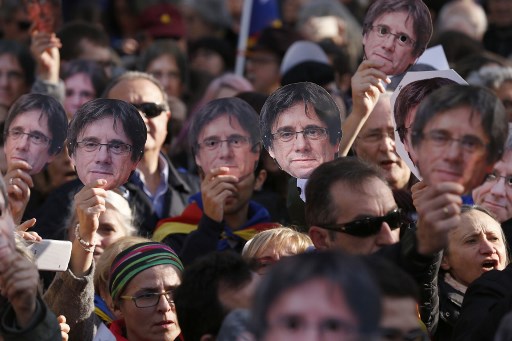 “If Spain proposes a model like the one in Switzerland, I think that would be an idea we could work with and perhaps an idea that could convince the majority of Catalans,” Carles Puigdemont said in an interview with Swiss public broadcaster RTS.

Switzerland is split into cantons or federal states that enjoy significant autonomy and independence.

And Puigdemont said that if Spain were organised along such lines, “there would be none of the problems there that we are seeing now.”

Puigdemont is heading to Switzerland this weekend to participate in a film festival focused on human rights.

He has been in Belgium since he sought exile there after the Catalan parliament unilaterally declared independence on October 27 following a banned referendum on secession.

He faces arrest if he returns to Spain.

Puigdemont suggested that if Madrid were willing to shed its intransigence, it could be possible to create an autonomous Catalonia within the Spanish state.

“I think that the majority of Catalonian separatists have shown over the course of the past 40 years that they are capable of working within an autonomous framework,” he said.

The 55-year-old earlier this month formally abandoned his bid to be re-appointed Catalan president, proposing imprisoned Jordi Sanchez as a candidate.

But in the interview, he did not fully relinquish his claim to lead Catalonia.

“I was elected the president of the government, which was illegally pushed from power. I am still the legitimate president,” he said.

Authorities in Bern said they had “taken note” of Puigdemont's intended visit.

“The Swiss and Spanish authorities are in contact… As a Spanish citizen, Mr Puigdemont is entitled to travel freely within the Schengen area. He is also at liberty to give political speeches with due respect for the Swiss legal system,” a foreign ministry statement said.

The question of Catalonia was “an internal matter for Spain,” the statement said.