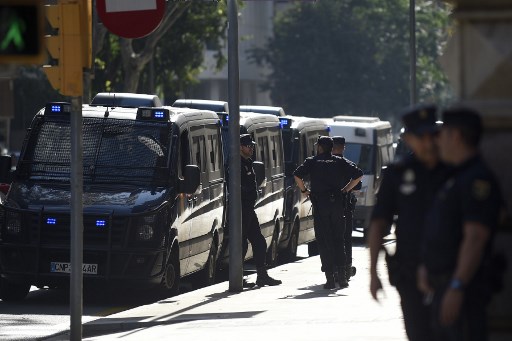 A Civil Guard spokesperson said the operation targeted the “citizens assistance office” and the offices of the grassroots separatist group Omnium Cultural, whose leader was jailed last year pending a probe into his role in Catalonia's breakaway bid.

During the raid, police detained the head of the citizens assistance department, Antoni Molons, and said his home would also be searched.

Officers were looking for “documents of an economic nature,” according to Omnium Cultural spokesperson, Roger Rofin, who denied the use of any public funding. “We have not received a single euro from the (Catalan parliament) since 2012,” he said.

According to Spanish media, police are seeking evidence into the public financing of the referendum, organised by pro-independence leaders on October 1 despite a court ban.

“We launched an operation in the context of the inquiry heard by the judge of court number 13 in Barcelona,” said the spokesperson.

The Catalan parliament was dissolved by Spanish Prime Minister Mariano Rajoy after it unilaterally declared independence on October 27 following the banned referendum on secession.

Since then, the region of 7.5 million people has been under direct rule from Madrid.