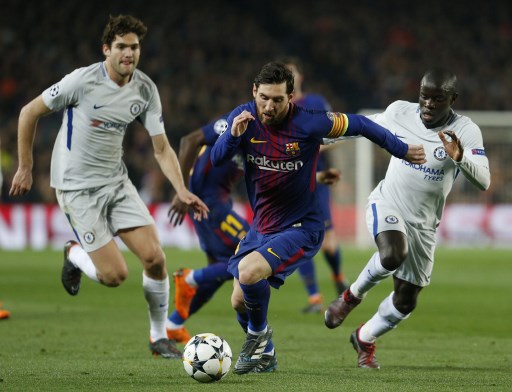 First chance through and Leo Messi has bagged a goal.

He then teed up Ousmane Dembele to double Barca’s lead in the second leg of the last-16 clash before registering a century of Champions League goals on his 123rd appearance to complete a 3-0 victory, 4-1 on aggregate.
Messi becomes only the second player to reach the milestone in Europe’s premier tournament, following Real Madrid’s Cristiano Ronaldo, who has 117 goals in 152 games.

By the end, the Argentinian’s scintillating breakaway in the build-up to Dembele’s first Barcelona goal had become little more than a footnote to what was another Messi masterclass.
It caps a remarkable five days for the 30-year-old, who sat out Saturday’s La Liga win over Malaga to attend to the birth of his third child.
Chelsea, in touch after the 1-1 draw at Stamford Bridge, were therefore unfortunate enough to encounter the striker fresh, free and at his frighteningly brilliant best.
At the finish, Chelsea coach Antonio Conte left the field with his arm around the forward, perhaps with nothing to add but congratulations.
Conte’s team had chances, particularly in the first half, but the sense was once Barcelona were in front they were content to sit back and counter.

When you're deceived by Messi's drop of the shoulder ???#UCL pic.twitter.com/KhpO1084E7

With Manchester United dumped out by Sevilla and Tottenham outmanouevred by Juventus, Chelsea’s exit means for all the talk of a Premier League resurgence, Liverpool and Manchester City are its only two representatives in the quarter-finals.
Spain have three, after Real saw off the challenge of Paris Saint-Germain.
FASTEST MESSI GOAL
Andres Iniesta shook off a hamstring strain to start while Dembele was a surprise inclusion, preferred to Paulinho and rewarded for his excellent display against Malaga.
Conte, meanwhile, plumped for Olivier Giroud up front ahead of both Alvaro Morata, who was on the bench, and Eden Hazard, who was granted his wish to play deeper in attacking midfield.
Within three minutes, however, Chelse’s plan to frustrate was spoiled. Messi started the move and finished it, with Dembele, Luis Suarez and a deflection off Marcos Alonso, helping him find the space to fire through the legs of Thibaut Courtois for the fastest goal of his career.
Chelsea responded well, with Willian and Victor Moses both posing a threat down the right, only for Barcelona to strike again in the 20th minute.
Cesc Fabregas failed to secure possession in midfield and Messi was away, skipping past a desperate lunge from Andreas Christensen, before taking the whole stadium by surprise by squaring to the back post.
The excellent Dembele took one touch and slammed the ball into the top corner.

Alonso and N’Golo Kante both went close before half-time, the latter arguably robbing Fabregas of an easier finish with the Spaniard’s right foot. Alonso then clipped the edge of the post with a bending free-kick just before half-time.
After an hour, however, any hopes Chelsea had of a comeback were extinguished. Suarez raced through midfield but looked to have hit a wall on the edge of Chelsea’s box.
Messi took over, tearing past the rooted Moses and banging the ball, again through the legs of Courtois, into the net.

Antonio Rudiger headed against the bar late on but Chelsea could not even find the scantest of consolations. Messi’s work was done.
Url copied to clipboard!