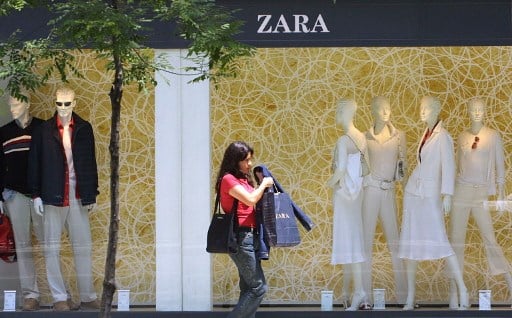 Inditex opened 183 new stores in 2017. Photo: Pierre Philippe Marcou/AFP
Spanish retail giant Inditex, which owns clothing brand Zara, said Wednesday its 2017 net profit jumped seven percent to 3.37 billion euros ($4.2 billion), beating its long-time Swedish rival H&M.
While slightly above analyst expectations, the profit rise was less steep than in 2015 and 2016.
As a result Inditex's shares dropped by over 5 percent at the opening bell in Madrid, only to recover much of that ground. They stood down 1.1 percent at 23.99 euros in late morning trading.
But Inditex, which owns eight brands including Zara, Bershka and Massimo Dutti, far outperformed H&M, which posted 1.6 billion euros in profits for 2017.
The Spanish company's sales also rose 9 percent to 25.3 billion euros, 10 percent of which were online.
Inditex, one of the world's largest fashion retailers, said it had invested 1.8 billion euros in 2017 “in further developing its integrated stores and online model and upgrading its technology,” it said in a statement.
This involves services like ordering items online and collecting them in-store, which in a few shops takes place in a fully automated pick-up point.
Part of the sum invested was used to expand a system of electronic chips on clothing tags which allows for a very precise inventory of sales and stocks.
Inditex CEO Pablo Isla told reporters this allowed for “full integration of stocks,” allowing the group “to offer products we have in-store for online sales.”
Inditex also opened 183 new stores in 2017, taking the total number of its shops around the world to 7,475.
Sixty percent of its turnover came from European sales, Inditex said.
Based in Arteixo, a small town in northwestern Spain, Inditex makes over half of its clothes in factories close to its main markets — in Spain, Portugal, North Africa, Turkey and Eastern Europe.
This business model allows it to get clothes to stores much faster than its rivals, who prioritise low production costs and outsource manufacturing to Asia, which means it can react more quickly to shifting consumer tastes to avoid excess inventory.
Clothes made for Zara, for instance, can go from the design stage to store racks in a mere two weeks. By comparison the process takes H&M six months.
Url copied to clipboard!