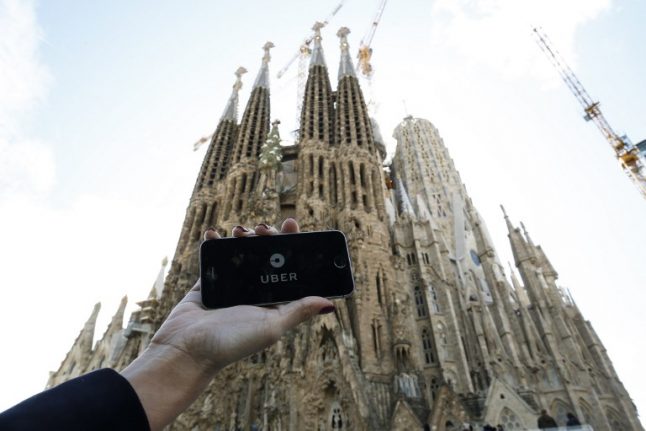 Spain's taxi industry has for several years fought against ride-hailing companies such as Uber. Photo: PAU BARRENA / AFP
Its uberX service started operations in the Mediterranean city on Tuesday with cars that have been given a licence to carry passengers for pay, a spokeswoman for the company told AFP.
US-based Uber — which links customers to drivers using a smartphone app — was forced out of Spain in 2014 by legal pressure and protests from taxi drivers.
A Spanish judge in 2014 suspended the company's UberPop service which enables unregulated drivers to ferry passengers, saying the drivers had to be given official authorisation to transport clients.
Then in December 2017, the EU's top court validated this, ruling that Uber was an ordinary transportation company instead of an app and should be regulated as such.
In Spain, the powerful taxi industry, which groups together close to 70,000 licences and 100,000 employees, has for several years fought against ride-hailing companies such as Uber or Spain's Cabify, accusing them of unfair competition.

@Uber_ES comes back to #Barcelona today.
?
Free competition gets the best for users.
???#UberX uses professional drivers so now what will traditional taxi companies and their unions argue now?
?
Barcelona’s taxi service is really dreadful so they better readapt. pic.twitter.com/x79ZzhNoEp

On Tuesday, the Elite Taxi company, which had campaigned against UberPop, pledged to track Uber's activities in Barcelona and any potential offences committed.
The industry's main federation, Fedetaxi, also asked Barcelona's city hall to be “uncompromising.”

Happy too see Uber back in Barcelona! A first important step to fastworward to a future where the private car becomes the exception and #MaaS becomes the rule! @cfabregas88 @MaaS_Alliance @UITPnews @ITF_Forum https://t.co/r7EGz4zNxa

Taxi drivers complain that Uber-type services are endangering their jobs and that ride-hailing companies are not implementing existing rules.
Spanish regulations stipulate there should be a quota of one licensed vehicle from companies like Uber or Cabify for every 30 taxis.
But official figures show there are more licensed vehicles than that.
In December, the Spanish government tried to address the issue with the creation of a national register that will allow authorities to better control the situation.
Spain has around 7,000 licensed vehicles, according to the transport ministry.