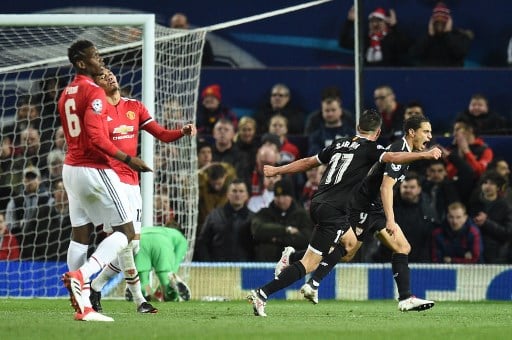 It took Ben Yedder less than two minutes to find the net against United. Photo: Oli SCARFF / AFP
The Andalusian side progressed by the same score on aggregate after a goalless first-leg draw.
The visitors were deserving winners as they controlled the game throughout but had to wait for Ben Yedder's introduction as a substitute to add a clinical finish.
Ben Yedder put Sevilla in front 16 minutes from time when he blasted into the bottom corner before heading in a second shortly after.
Romelu Lukaku reduced United's arrears, but it was too little, too late with United boss Jose Mourinho's decision to once again drop Paul Pogba certain to be scrutinised.
Mourinho sprang a surprise before kick-off by recalling Marouane Fellaini at the expense of Pogba, who had also been dropped for the first game.
Jesse Lingard also returned in place of Juan Mata in Mourinho's only other change from the side that beat Liverpool 2-1 at the weekend.
And Lingard nearly had an instant impact as he teed up Lukaku on the edge of the box, but the Belgian's effort drifted high and wide.
Sevilla dominated the vast majority of the first leg only to be denied by some stunning saves from David de Gea.
However, it was wayward finishing rather than the Spanish number one that prevented the visitors making the most of their ascendency for most of the match.
Joaquin Correa headed just over from a corner before Luis Muriel and Franco Vazquez fired off target when well-positioned on the edge of the area.
Indeed, of Sevilla's 10 efforts on goal in the first period only one weak Muriel effort forced De Gea into making a save.
Fellaini gamble backfires
Mourinho's gamble on Fellaini appeared to have largely backfired as he failed to impose his physical presence on Sevilla's ball players in midfield.
Yet, the Belgian nearly made the breakthrough with United's best move of the opening period when he latched onto Alexis Sanchez's layoff and his powerful effort was turned behind by Sergio Rico.
The second period began in the same vein as the first with Sevilla on the front foot, and only a brilliant last-ditch tackle by Eric Bailly denied Correa a clear sight of goal.
Chances kept coming for Sevilla as Muriel then turned a dangerous Pablo Sarabia cross inches wide.
Pogba, who cost United a then-world record £89 million ($116 million) in 2016, was eventually introduced just after the hour mark with Fellaini sacrificed.
However, even the Frenchman couldn't kickstart the hosts and they were eventually made to pay.
Ben Yedder had only been on the pitch for two minutes after replacing Muriel, when he finally broke the deadlock in the tie with brilliant finish low into De Gea's bottom left-hand corner.
Mourinho responded by throwing on Anthony Martial and Juan Mata, but their attacking edge was needed far earlier as Ben Yedder soon put the outcome beyond any doubt when he forced home a corner at the far post despite a despairing effort by De Gea.
Sevilla should even had added to their lead as Clement Lenglet and Correa came close.
Lukaku finally got United on the board six minutes from time when he swept home a corner.
But it was to little avail as United have now failed to reach the quarter-finals for five straight years.
Url copied to clipboard!