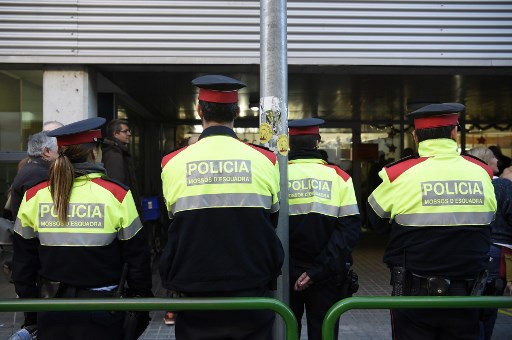 The suspended officer called the ban on Spanish "illegal" and "arbitrary". Photo: Josep LAGO / AFP
Catalonia’s Mossos d’Esquadra police force is preparing its case against the officer, calling for serious sanctions for his “lack of consideration and respect” towards his superiors.
The suspended officer is reported by Spanish daily El Mundo to have been reprimanded by the squad sergeant for repeatedly filing case reports in Spanish.
This allegedly went against an internal memo the same sergeant had sent out to his team several years earlier, ordering them to only use Catalan.
When called in to his superior’s office and questioned, the Mosso officer refused to accept his orders, instead calling in three colleagues to hear their opinion on the matter.
He then proceeded to call the ban on using Spanish “illegal” and “arbitrary”, in a tone the force’s Internal Affairs Department has labeled as “defiant”.
Even though the spat took place in October 2016, it is only now that the case has been opened against the defiant officer, who’s currently serving a 16-day suspension without pay and could face more time without his uniform.
According to Catalan daily La Vanguardia, the Department of Internal Affairs acknowledges “that the officer’s questioning of the rules was legitimate, it doesn’t justify how he disrespected the rank.”
“He created a hostile environment with his defiant behaviour, and his demands and arrogance lasted for some time,” the formal complaint reads.
But the officer’s lawyers argue that it’s only a ploy to distract from their client’s “opposition to illegal orders”.
The Mossos d’Esquadra’s official language regulations state that the use of “Catalan may be normal or common, even preferred” in the region’s public administration offices “but never exclusive”.
Url copied to clipboard!