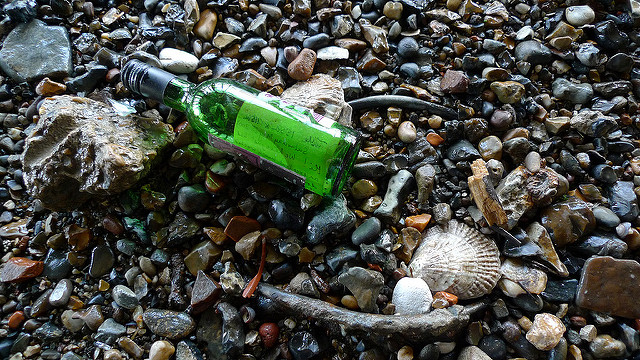 "I didn't think it would be possible for it to end up further than New Zealand". Photo: Internets Dairy/Flickr
Julien Joy, from Whangerei Harbour in the North Island of New Zealand, could not believe his eyes when he received a letter in the post from a complete stranger reminding him of a distant memory.
Luisa, as the German woman is referred to in New Zealand press, was on a family holiday in the Basque coastal village of Mundaka when a glass bottle washed up at her mum’s feet on a local beach.
The message was from a seven-year-old New Zealander, including just a few words and information to introduce himself to the world.
Eight years later after the bottle was swung into the Pacific, Luisa wrote back to the now teenage Julien, using the address and name he provided his unknown receiver with.
When the Joys received Luisa’s reply in the post, they were confused at first, then they thought it was a prank from relatives of theirs who coincidentally live in Germany, and were finally in awe of the fact that the bottle had made it that far.
“We’d forgotten all about the bottle because it was eight years ago and we were just so excited to find out it had made it anywhere,” Julien’s mother Jana told New Zealand's News Hub.
“With all the sand bars and currents I didn't think it would be possible for it to end up further than New Zealand,” she added.
“We never thought it would even get out of Whangārei Harbour.”
The two families have now moved over to email as a faster means of communication but as a symbolic gesture, Luisa decided young Julian’s message needed to be seen by more people.
“My older sister is a navy officer and works on a ship and I thought it would be a nice idea to ask her if she could put your message in a bottle in the North Sea,” she wrote back to Julian.
“I hope that your message will be transported with the Gulf Stream maybe to Africa or even South America.”

Bottle from Kirsten Lepore on Vimeo.