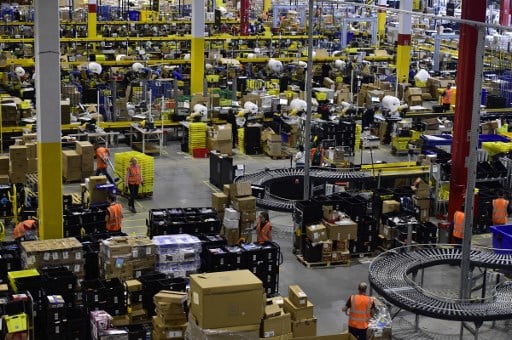 The strike is planned for March 21 and 22. Photo: GERARD JULIEN / AFP
“We have announced a strike for the first time in Amazon Spain but it will only take place in the logistics centre of San Fernando de Henares, near Madrid, the biggest in Spain and the first created in the country” in 2012, said Ana Berceruelo of the CCOO union.
The strike is planned for March 21 and 22.
Berceruelo said the online retail giant wanted to increase salaries below the inflation rate, and reduce allowances for night work as well as pay for overtime.
CCOO says the workers in the San Fernando de Henares centre, where they prepare packages for clients in Spain and Europe, have not had a wage increase since 2016.
Berceruelo said 1,100 Amazon employees, and 900 people employed by temping companies, work on site.
She said that the average salary was around 20,000 to 21,000 euros ($24,800 to $26,000) a year against 19,000 euros in the logistics sector.
“We will continue to maintain direct dialogue with our associates and guarantee the best working conditions, a competitive pay package, a great work atmosphere and professional opportunities,” the company said in a statement.
Amazon has grown from a humble beginning as an online bookseller to a colossus of the internet whose founder Jeff Bezos is now the world's richest man.
Url copied to clipboard!