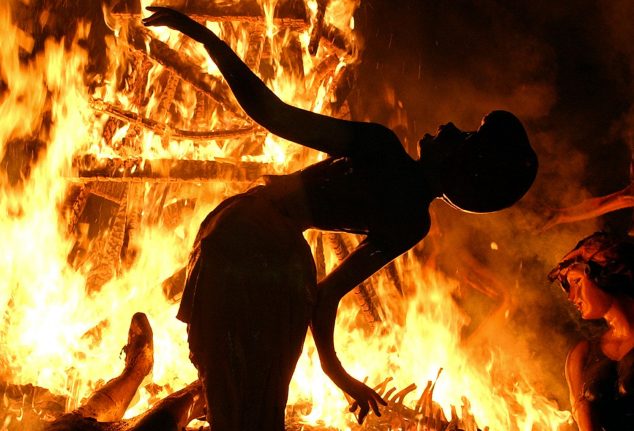 A doll burns during a protest against domestic violence in Seville. Photo: DPA.
At a time when women in Spain are gaining an international voice for their fight against inequality and discrimination at work, the country’s courts have released figures that suggest the problems Spanish women face at home are just if not more as alarming.
A total of 158,217 women in Spain were subjected to violence by men in 2017, Spain’s leading judicial body (CGPJ) made public on Monday.
That harrowing figure represents a 17.7 percent increase when compared to 2016 stats, and now stands as the highest number on record.
Spanish courts also received more complaints relating to gender violence than ever – 166,620 cases – 16.4 percent up from 2016 figures.
The CGPJ highlighted that the number of minors brought to justice for violence against women also increased from 179 in 2016 to 266 in 2017.
“These figures are unacceptable and unlike what you’d expect from a mature and civilized society,” Ángeles Carmona, Head of Spain’s Gender Violence Observatory, told Spanish news agency EFE.
READ MORE: Five reasons why Spain is still failing on women's rights
“It’s worrying that these chauvinist attitudes exist among the youth; they more than anyone should be an example of equality, respect and freedom. “
Carmona added that the only silver lining is that the increase in the number of cases makes the issue of gender violence in Spain more real and shows that “there’s no impunity when it comes to how the law works”. A total of 33.146 men received prison sentences in Spain in 2017 for crimes relating to physical and verbal abuse against women.
Last December, Spain’s Parliament agreed to a €1billion five-year programme to tackle gender-based violence.
Some of the measures included providing victims with six months' unconditional unemployment benefits to allow them to be more financially independent, as well as preventing imprisoned abusers receiving visits by their children.
Spanish Parliament has endorsed around 200 measures to address gender violence since the case of Ana Orantes in 1997, a 60-year-old who was beaten, thrown over a balcony and then burned to death by her ex-husband after repeatedly complaining to authorities about his violent behaviour.
Unfortunately, figures by pressure groups and NGOs suggest that more than 900 other women in Spain were murdered between 2003 and 2017, calling into question whether many of these measures actually work.
March 8th’s 5.3 million-strong feminist strike in Spain highlights just how strongly women in Spain feel about putting an end to institutionalized chauvinism in Spanish society, whether at home or in the workplace.
READ MORE: Is Spain winning or losing its battle against gender violence?
Url copied to clipboard!