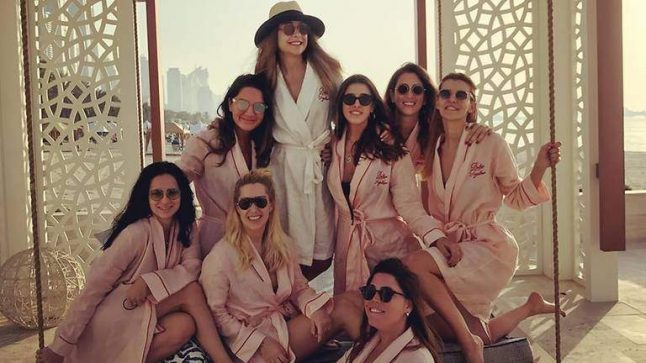 The party of eight were celebrating the hen party of Mina Basaran, daughter of Turkish business tycoon Huseyin Basaran. Source: Instagram
All 11 people on board the private Turkish plane died in the incident, Iranian state media reported on Monday.
Among them was a party of eight young women, who were flying to Istanbul after celebrating a hen party in Dubai for one of the group members, Mina Basaran, daughter of renowned Turkish businessman Huseyin Basaran.
Spanish diplomatic sources have confirmed that two of women, whose names have not yet been released, were of Turkish origin but had obtained Spanish nationality through the recent Spanish law that grants citizenship to the descendants of the country’s Sephardic Jews.
As with many brides-to-be, 28-year-old Mina Basaran shared numerous images of her bachelorette party on Instagram, even posing in front of the aircraft before it took off.
Her profile has since been filled with thousands of comments offering condolences. Source: Instagram
It is understood that the private plane belonged to her father’s holiday company.
Turkish and Iranian authorities located the plane’s black box hours after the aircraft crashed in the Zagros Mountains on Sunday evening.
The crew, including the two pilots, were also all female, the reports said.
There was no immediate indication as to the cause of the crash but local media has reported that plane disappeared off the radar during a snowstorm over the Zagros Mountains. Source: Ali Khodaei/AFP
Iran's state news agency IRNA said rescuers at the site had found 10 bodies, which were to be taken by helicopter to the Shahr-e Kord airport, about 400 kilometres (250 miles) south of Tehran.
Rescue workers are continuing to search for the eleventh body, it said, adding that all the corpses so far found had been identified except for two, which were heavily burnt.
The crash comes less than a month after a twin-engine passenger plane of Iran's Aseman Airlines crashed in the Zagros range, killing all 66 people on board.