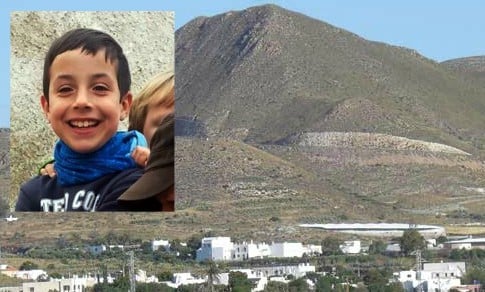 The young boy was last seen alive at his grandmother’s home southeastern village of Las Hortichuelas, near Almería. Photo: Guardia Civil/Google Street View
Hundreds of officers had been mobilized in the search for Gabriel Cruz after he went missing on February 27 in the southeastern village of Las Hortichuelas, near Almería.
“This morning, the Civil Guard stopped the partner of Gabriel's father (Ana Julia Quezada) while she was transporting the little boy's corpse in the boot of a car,” Interior Minister Juan Ignacio Zoido said.
The case’s prime suspect first raised the suspicions of Spain’s Civil Guard when on March 3rd she claimed to have found a T-shirt belonging to Gabriel 10 kilometres from where he was last seen.
Police confirmed the garment had the missing eight year old’s DNA on it, but Quezada claimed to have spotted it in an area where authorities had already carried out a thorough search.

Several media sources maintain Spanish police have been monitoring the 43 year old from the Dominican Republic ever since.
It is understood that on Sunday Spain's Civil Guard followed her to Gabriel's grandmother's country house and covertly filmed her as she removed the child's body from a well and put it in the boot of her car.
Authorities proceeded to arrest Quezada as she parked her vehicle outside her apartment.
Gabriel's father Ángel isn't a suspect at present, according to police sources.
An autopsy carried out on the child found the cause of death to be strangulation.
Spanish daily El País reported on Monday that authorities have begun looking into Quezada's criminal records and found that she was a previously suspect in the death of her four-year-old daughter, who fell out of a window in an apartment block in 1996, but a court later ruled the child's death accidental.
Quezada pictured with Gabriel's father Angel. Source: Facebook
Gabriel’s disappearance has gripped the nation ever since a missing person's alert with a photo of him smiling went viral on WhatsApp, Facebook, Twitter and other social media.

A picture of a blue fish, inspired by Gabriel's love of the sea, was widely shared under the hashtag #TodosSomosGabriel, “We're all Gabriel” in Spanish.

The young boy was last seen alive at his grandmother’s home when he left to go play at a neighbour’s house on 27 February.
According to authorities, hundreds of volunteers have helped Spain’s Guardia Civil with the search, scouring the nearby countryside on foot and on horseback.
Spanish Prime Minister Mariano Rajoy tweeted his condolence on Sunday: “I share with all Spaniards the pain of losing Gabriel,” he wrote.
Url copied to clipboard!