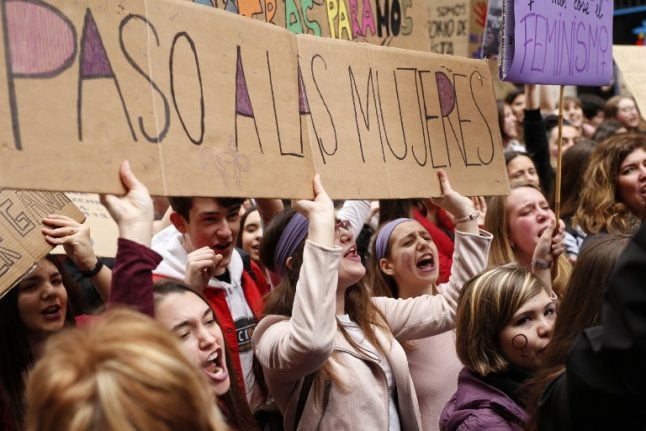 Called by 10 unions to demand gender equality, particularly where salaries are concerned, the strike dominated the headlines with famous female presenters noticeably absent from radio or television shows.

READ MORE: Everything you need to know about Spain's women’s strike

Feminist groups have also called on women not to spend money, particularly on items such as deodorant whose versions created for women often cost more, and to ditch domestic chores for the day.

On balconies across Spain, women draped their aprons to demonstrate they were on strike.

The strike is attempting to emulate Iceland's 1975 work stoppage, when women took a day off in October to demonstrate their vital contribution to the country's economy and society.

However Spain's two main unions — the CCOO and UGT — have called on their members to stop work for only two hours on Thursday. Demonstrators hold a placard reading “Manolo today you'll do your dinner on your own” in Barcelona. Photo: AFP

Ana Reyes, a 37-year-old PR executive, said she was striking “in the hope that the importance of half of the population will be recognised and that it will bring about a real change.”

She told AFP the action gave “visibility to the malaise and discrimination we women suffer”.

The strike comes as countries around the world mobilise for #internationalwomensday2018, a worldwide trending topic on Twitter, and comes hot on the heels of #MeToo and #Timesup campaigns that went global with allegations of sexual misconduct in Hollywood.

Spain is a leading country in the fight for women's rights and against gender violence, even though much remains to be done.

In 2004, for instance, the then Socialist government approved a law on violence against women that the European Council has upheld as an example to follow.

The groundbreaking legislation set up a hotline that would not appear on users' phone bills, offered free legal aid and established special courts for victims. Last year, though, 49 women died at the hands of their partners or ex-partners, an increase on 2016 when 44 were killed, official statistics show.

Women earn 14.9 percent less than men in Spain, slightly better than the EU average of 16.2 percent, according to the bloc's statistics agency Eurostat.

Official data also show that more women leave their job when they have children than men. A woman walks past a protest called by “Las Kellys” housekeepers collective ('Las Kellys' is a word game with the sentence 'Las que limpian' –Those who clean–) in front of the Hilton hotel in Barceloa. Photo: AFP

It was not yet clear how many Spaniards went on strike, but trains on the Madrid and Barcelona undergrounds were less frequent than usual.

Meanwhile, more than 300 intercity and long-distance trains were cancelled throughout Spain.

The mobilisation started at midnight when women gathered on Madrid's central Puerta del Sol square to bang pots and pans.

In major cities across the country on Thursday evening, representatives of political parties, unions and associations will join regular men and women protesting for more equality.

High-profile women politicians have also spoken out strongly against inequalities.

Deputy Prime Minister Soraya Saenz de Santamaria on Wednesday spoke of the discrimination she has suffered: “When you're a woman and you take on certain responsibilities… you realise that there are still many things that need changing because even as deputy prime minister you experience unacceptable sexist behaviour.”