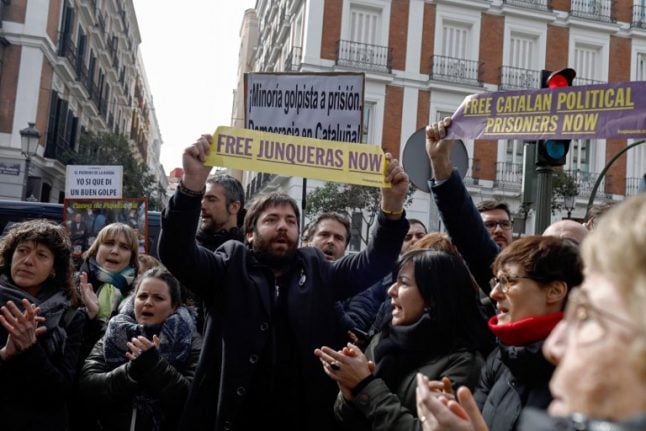 A protestor holds a banner demanding freedom for jailed deposed Catalan regional vice-president Oriol Junqueras. Photo: OSCAR DEL POZO / AFP
In his place, Puigdemont, who led Catalonia's failed secession attempt in October, proposed Jordi Sanchez, head of the hugely influential pro-independence ANC citizens' group, as his preferred choice to govern the region. But this is likely to be difficult as Sanchez has been in prison for more than four months as he is investigated for sedition, one of four separatists in jail over their role in the independence drive.
“To govern part-time because you're on the run or in prison doesn't make sense,” Inigo Mendez de Vigo, spokesman for the Spanish government, told reporters Friday. “The government won't allow it.”
READ ALSO: Exiled Puigdemont abandons bid to return as Catalan leader
Separatist rifts
Puigdemont's candidate isn't a favourite among some of his separatist allies either. Sergi Sabria, spokesman for the left-wing, separatist ERC party, said Oriol Junqueras, Catalonia's deposed vice president and ERC leader, would be more adequate.
“In terms of legitimacy, Oriol Junqueras would be better placed,” he told Catalan radio.
The problem is Junqueras is also in jail as he is investigated for rebellion, sedition and misuse of public funds for his role in the secession drive, which culminated on October 27 when Catalan lawmakers declared independence.
The Spanish government moved in immediately after the declaration, stripping Catalonia of its prized autonomy, sacking its separatist government, dissolving its parliament and calling snap elections on December 21.
Puigdemont left for Belgium shortly after the declaration and was charged with rebellion, sedition and misuse of public funds. But he still ran in the December polls from abroad, leading the separatist bloc to victory as they retained their absolute majority in parliament.
Junqueras and Sanchez also campaigned from jail, and were elected as lawmakers.
Puigdemont warned on Catalan radio Friday that “whoever puts obstacles in the way of Jordi Sanchez being appointed president will make a serious mistake”.
There is precedent for jailed politicians being allowed out of prison. In 1987, a politician from the northern Basque Country jailed for belonging to armed separatist group ETA was allowed out to defend his candidacy for the regional presidency. He lost the vote.
Fighting from abroad
Whatever happens in Catalonia, Puigdemont intends to continue fighting for independence from abroad.
“Surrender is not in my vocabulary,” he told Catalan radio.
He intends to preside over a “republican council” that will coordinate with Barcelona's executive from Belgium, once it is up and running.
“These days we don't know how many presidents we have,” Miquel Iceta, the Socialist party's Catalan leader, said Friday with a touch of irony.
Puigdemont has hired high-profile lawyer Ben Emmerson, a former United Nations special rapporteur on counter terrorism and human rights.
In a Friday press conference, Emmerson said he had filed a petition with the UN Human Rights Council “against Spain for violation of the Universal Declaration of Human Rights and the more recent International Covenant on Civil and Political Rights” in its crackdown on the secession bid. And he promised more legal action in April.
In the meantime, Catalonia remains without an effective government and under direct control from Madrid, which means it cannot manage its own healthcare or education as it previously did previously as a semi-autonomous region.
Once a new government is installed, however, Catalonia will recover its autonomy.
By AFP's Daniel Bosque and Toni Cerda