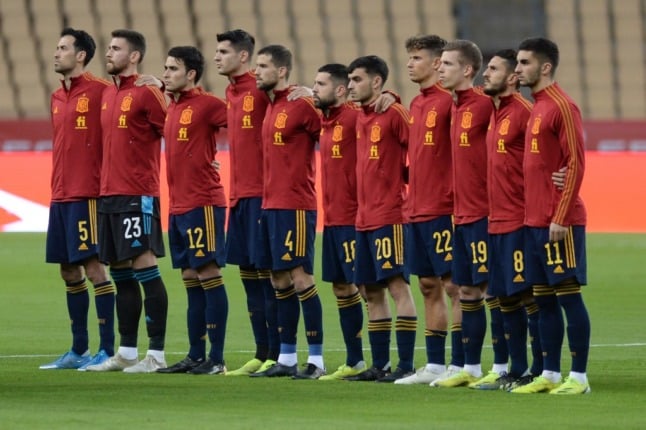 Spain's Euro 2020 squad while their national anthem is played, having warmed up everything but their vocal chords. Photo: Cristina Quicler/AFP

Spain’s national anthem – La Marcha Real (the Royal March) – has been around for more than 250 years.

But practically for that entire quarter century, it has remained without lyrics.

The bizarreness of this muted patriotic hum-along is best evidenced whenever Spain’s national football team goes against other sides whose players bellow the words with tears in their eyes – think France with their epic Marseillaise anthem. The Spanish fans in the stands on the other hand usually just sing lo-lo, lo-lo  to the music.

Bosnia and Herzegovina, Kosovo and San Marino are the only other countries with no words to their anthems, but that can be somewhat understood given that they’re either relatively new or tiny nations.

So what is Spain’s reason?

Well, the main problem seems to be that Spaniards have never been able to make up their minds about which lyrics they liked most.

The original anthem, written in 1761 by Manuel de Espinosa, was not composed as an anthem with lyrics, but rather to serve as a military march to provide a beat for the Spanish Infantry. King Carlos III adopted the then-named Marcha Granadera as the official march of Spain in 1770 and it later became the official anthem.

While lyrics have been written and used for the anthem in the past, none have ever been made official by the Spanish government.

During the dictatorship of General Francisco Franco the national anthem was given lyrics penned by fascist poet José María Peman but those verses were dropped on the dictator’s death and Spain’s transition to democracy.

Scene from the 2019 movie While at War in which Franco’s soldiers appear to be singing different  sets of lyrics to Spain’s national anthem.

In an interview with the national radio of Spain (RNE) Pablo Iglesias, the then-leader of hard-left party Podemos said that lyrics for the anthem are meaningless if corruption and inequality stand in the way.

The association the national anthem has with Spain’s royal family – which for the past eight years has seen its popularity tumble following corruption and other scandals – is not exactly strengthening the case for a common chorus uniting to celebrate tradition and monarchy.

The lyrics chosen in a competition of 7,000 entries drew criticism with its opening line of “Viva España”, a phrase associated with the dictatorship of Franco.

In 2015, Madrid composer Victor Lago started a change.org petition with his lyrics that began with the words “Glory, homeland” but failed to win enough support to take it any further.

A year later and it was the turn of Guillermo Delgado Ortega, a composer who thought that he could win consensus with his verses focusing on freedom, peace and equality – without mentioning Spain at all. But that initiative was dropped too.

Then Spanish pop singer Marta Sánchez had a go in 2017, performing her rendition of the anthem complete with words extolling pride in Spain, a sentiment that was never going to go down well with independence-minded regions, especially keeping in mind the political situation at the time.

“The immense majority of Spaniards felt represented. Thanks, Marta.”

But with the Catalonian independence referendum held that same year, it was always going to be unlikely that lyrics approved by the government would receive support from separatists in the Basque and Catalan regions.

Others have tried and failed since, so is it realistic to think that Spain’s regions, politicians and people will ever decide to embrace the normality of having words to sing along to during the national anthem?

“I hope not,” Francisco Layna, an author and professor of literature living in Madrid told The Local Spain.

“I don’t like anthems, period. What I like the most about Spain’s anthem is precisely the fact that it doesn’t have any words.”

Antonio Escobar, a lifelong resident of Madrid’s Salamanca neighbourhood spoke about how the ongoing push for independence in Catalonia makes it unlikely that all regions will ever compromise.

“With everything that’s going on in Catalonia the Spanish people have taken an introspective look at their country and what it means to be patriotic,” said Escobar.

“We never saw the need for words, and it doesn’t mean we aren’t patriotic, it means that there wasn’t a need to express that patriotism so blatantly.”