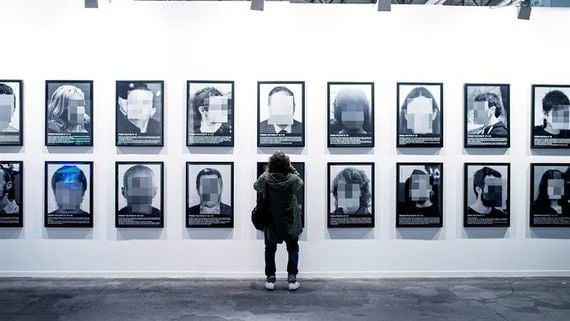 A woman observes the exhibit before it was taken down. Photo: Santiago Sierra/Facebook

The decision to remove the exhibition within hours of the art fair opening to the press has prompted charges of censorship against the government-funded body which operates IFEMA, a vast exhibition space on the outskirts of Madrid.

Gallery organisers were asked to remove the exhibit on Wednesday just hours after a press preview ahead of the art fair opening to the public. The exhibit was taken down on Wednesday. Photo: AFP

“The controversy sparked by the display of this artwork is diverting attention away from the exhibition as a whole,” read a statement released by IFEMA.

The gallery owner agreed to the request by authorities to dismantle the show.

“I guess someone wants to avoid a fracas over Catalonia,” explained the owner of the gallery in a press conference.

“I'm in someone else's house and if Ifema does not want the exhibit there then I’ll take it away. But in my own house, nobody takes anything from me. “

Madrid City Hall, which is run by a far-left coalition, has demanded a full explanation from IFEMA.

The artist included images of Deposed vice president of the Catalan government Oriol Jonqueras, and two officials Jordi Cuixart and Jordi Sanchez, who are all behind bars on sedition charges over staging the illegal referendum on independence in Catalonia last October 1st.

Other portraits included those who had fallen foul of Spain’s unpopular ‘gag law’ including two puppeteers who faced charges last year after including references to Basque terrorism in a children’s theatre show.

Sierra said such censorship by authorities was damaging for Spain's reputation.

“I've just learned about the censorship of my work,” the artist wrote on his facebook page. “I believe that this decision seriously damages the reputation of this international fair and of the Spanish state itself.”

“It shows a lack of respect towards the gallery owner, who was among the founding members of this art fair, as well as to the maturity and intelligence of the pubic.

He added: “Finally, acts of censorship like this bring sense and reason to such a piece, which exists to denounce the climate of persecution suffered by cultural artists in recent times.”

The decision to pull the exhibit, which had already been sold in its entirely to one buyer for €80,000,  came amid further outrage over censorship.

Earlier this week, a court ruled to uphold a three-and-a-half year jail sentence for a rapper for “glorifying terrorism and insulting the king”.

Several people have faced charges and jail terms in Spain in recent years because of song lyrics and tweets, particularly over glorifying terrorism.

Leftwing figures have branded the prosecutions an attack on freedom of expression.

“Censoring a book because it speaks of corruption, sending a rapper to jail for a song, or taking down a work of art because it's uncomfortable. The gag laws of the PP are incompatible with a fair and democratic country,” tweeted hard-left party Podemos deputy Irene Montero.