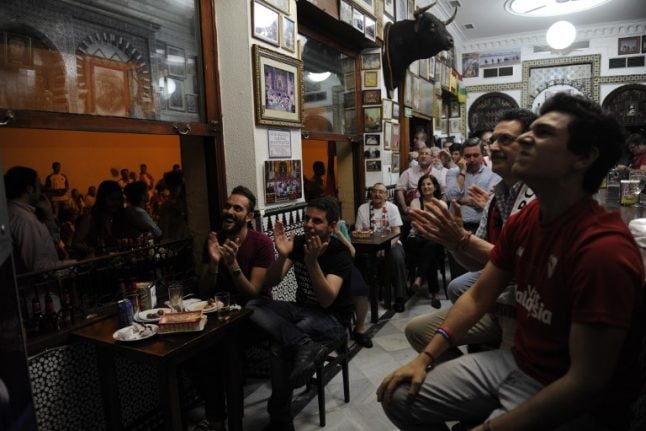 Seville supporters watch a match on television in a bar. File photo: AFP

The fund bought a 53.5 percent stake in Imagina, a holding company that includes Mediapro, which also produces films and series, and Globomedia, another media producer, for one billion euros ($1.2 billion).

In Spain, Mediapro has the rights for the Champions League and eight out of every 10 La Liga matches.

“The agreement will give the group access to the emerging market in China,” Mediapro added in a statement.

Mediapro also has television distribution rights for the International Basketball Federation in Spain.

Apart from sports, it has produced films such as Midnight in Paris and other Woody Allen movies, and television series including The Young Pope starring Jude Law.

The president of the group Jaume Roures, based in Barcelona, is an influential media man in Spain.

Fervently pro-independence, he is thought to be close to Catalan separatist leaders.

He owns 12 percent of Mediapro, as does Tatxo Benet, another founder.

Both Roures and Benet will remain at the head of the group.

“The acquisition of Imagina will not only allow us to introduce advanced audiovisual production technology in China, but also open up new persectives for exchange and cooperation between China, Spain and Latin America in the fields of content, culture, sports,” said Tony Ma, head of Orient Hontai.

The Chinese fund specialises in investments in the technology and media sectors.