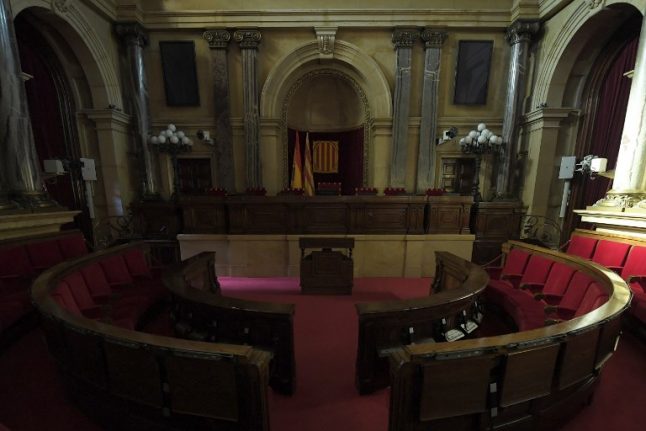 The Catalan parliament. Photo: Lluis Gene/AFP.
Carles Puigdemont remains in Brussels and Catalonia without a president. As the Spanish government waits for the next move from pro-separatist parties, several issues remain to dissect.
Eduardo Bayón, an expert on Spanish constitutional affairs, discussed Elsa Artadi as a potential new Catalan president, how further delays could lead to new regional elections and the unlikelihood of any constitutional reforms anytime soon.
The Local Spain: Supporters of independence have suggested that Puigdemont could remain as a 'symbolic' president, with an administration in Catalonia actually administering the region. Do you think this could end up being the solution?
Eduardo Bayón: No, I do not think that is the solution. I believe that this proposal must be understood in the context of a battle between Junts per Catalunya and ERC, whereby the latter in order to avoid new elections and seek a viable path within the legality of Article 155, has tried to remove Puigdemont from power by offering him a symbolic charge.
The greatest asset that the independence movement has, and the electoral result of December 21st makes clear, is Puigdemont himself, who aims to retain the accumulating power of the pro-independence forces. He knows about his position of strength and that in a hypothetical new election his result would improve. On the other hand, the ERC's move to postpone the full investiture, the wearing away of pro-independence electorate and recently-heard cries of “traitors” place him under pressure.
TLS: In our past correspondence, you mentioned the potential of certain constitutional reforms to help put an end to the current situation in Catalonia. Are we closer to seeing any of these enacted?
EB: No, the situation of Catalonia has devoured everything. The polarized scenario that has been drawn up in the last year has been in full force and is generating a reaction against the Catalan independence movement while nourishing a Spanish nationalism that is shielded by the current Constitution. The result is that the modification of the Constitution now seems unfeasible even though it could help solve political problems. Therefore, I believe that we are still far from seeing any constitutional reform, which would also happen because the political forces agreed with the PP, since its majority in the Senate gives it a veto capacity of any attempt to modify the status quo.
READ ALSO: Does Spain need to reform its constitution?
TLS: What other candidates for the Catalan president could help to end the current stalemate? If a candidate other than Puigdemont is sworn in as Catalan president, what policies are they likely to promote at the beginning?
EB: The alternatives to Puigdemont I think is Elsa Artadi, current spokeswoman of Junts per Catalunya and director of the electoral campaign of the independence formation, which has become a great asset for the party. The other option would also go through Oriol Junqueras, who although in prison, could be inaugurated as president – this would effectively suggest a restoration of the previous government deposed by the application of Article 155.
But as I said before, I think that the fact that there is a struggle between the two main political forces of the independence movement for hegemony brings everything closer to a new election vis-a-vis the legal impossibility of swearing-in Puigdemont. But take into account that it is Junts per Catalunya who has the better electoral prospects if there is a return to the polls, which gives them a position of strength in negotiations with the ERC.
TLS: The Spanish media seem to be tired of the Catalan stagnation. But what is the general feeling among Spanish people? Are there any important recent survey to show this?
EB: We have data about the importance that Spaniards attach to the independence of Catalonia. The Center for Sociological Research (CIS) regularly surveys about the issues that most concern Spaniards and that these consider as the main problems in Spain. In October, when the Catalan question was at its height, the independence of Catalonia became the second problem that most concerned the respondents, being for 29% the main problem faced by Spain.
In the last survey, published this week and carried out during the month of January, the independence of Catalonia falls to fifth position – only 15% of respondents consider it the main problem for Spain. This shows that the presence of the Catalan independence debate begins to be assumed with some normalization, and that, in addition, a large part of the Spanish – between the application of Article 155 and the holding of the December 21st elections – have ceased to see it as one of the main problems facing the country.
TLS: A report from the Columbia School of Journalism argued that several Spanish media have shown their impartiality in the coverage of Catalan affairs. Do you think the Catalan situation has highlighted a problem in the Spanish media?
EB: It is true that many of the major Spanish media have shown a coincident and unanimous point of view that is contrary to the independence process and that they have also done so with clear intentions and positioning. In addition, being the shared position on the Catalan issue, they have shown a lack of plurality, and above all of impartiality, as pointed out in the report of the Columbia School of Journalism.
READ MORE: Catalonia at an impasse: So what next?
Follow Eduardo Bayón on twitter: @edubayon_