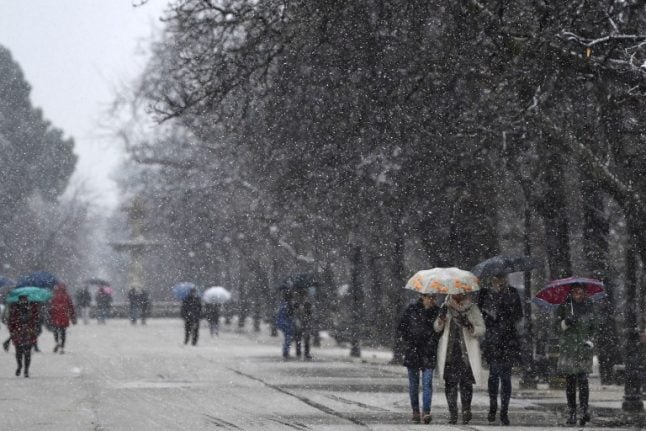 Madrid's Adolfo Suarez Barajas airport closed two of its four runways on Monday afternoon because of snow and ice which forced the cancellation of 49 flights (by 5pm).

Spain’s meteorological agency issued snow alerts for 32 provinces with the heaviest snow expected to fall in Huesca, Zaragoza, Cantabria, Albacete, Ciudad Real, Cuenca, all of Cataluña, Castellón and Asturias, which have all been issued with orange alerts.

The milder yellow warnings are in place for Córdoba, Granada, Jaén, Teruel, Guadalajara, Toledo, most of Castilla y Leon and Madrid, Navarra, La Rioja and the Basque Country.

At least 53 roads were closed because of snow and ice, including the troubled AP6 tollroad, where hundreds of motorists were stranded in a snowstorm last month.

Spain’s traffic authority said that at least 300 roads were experiencing problems in the adverse weather by first thing on Monday morning.

Police in Catalonia had to go to the rescue of a group of school children who became stuck in a mountain hut during a school outing.

Temperatures reached below zero in some parts, including Madrid when a dusting of snow fell in the capital while in moutainous regions the mercury plummet to -10C.

The inclement weather is expected to continue until at least Wednesday

.Motorists are advised to check the status of roads on the website of Spain’s Traffic Department before embarking on their journey, and then in red alert areas to avoid making unnecessary journeys.

The kits should include snow chains for the tyres, a shovel in case you need to dig the car out of a snowdrift, warm weather clothing and emergency rations. And social media was filled with images of people enjoying themselves in the snow, skiing past Segovia's famous aqueduct.

Meanwhile even in Tenerife, the Teide volcano was covered in snow: