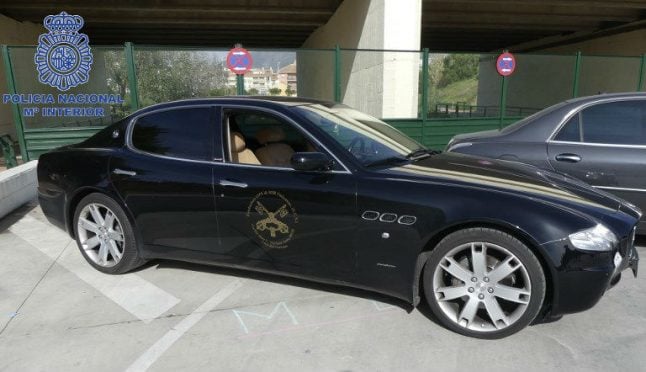 Police seized this luxury car bearing a fake coat of arms. Photo: Police hand out/AFP
Officers arrested three Spaniards and a Colombian suspected of operating the phoney branch in Fuengirola near the posh sea resort of Marbella, police said in a statement.
The group “usurped the identity, symbols and image” of the bank, which does not have an office outside Vatican City, to obtain “huge profits” from contracts signed with “a lot of companies around the world” to develop “commercial relations and provide financial advice,” it said.
The group's office in Fuengirola features the shield of the Vatican on its glass door and is decorated with statue depicting the Virgin Mary holding the baby Jesus in her arms.
Another showed a black luxury vehicle decorated with the same Vatican shield on one of its doors.
Police said they were still figuring how many people around the world fell victim and how much money the gang had raised.
Officers seized a yacht, several luxury cars and silver ingots as well as 5,000 euros ($6,225) in cash as part of the operation.
Among those arrested is the suspected ringleader, a 30-year-old Spanish man who claimed to be a member of the Vatican's diplomatic corps and had fake documents that identified him as a Cuban ambassador.
The four suspects face charges of fraud, money laundering, impersonation and criminal association.
The ring had even printed out official-looking car stickers for their vehicles (see below).