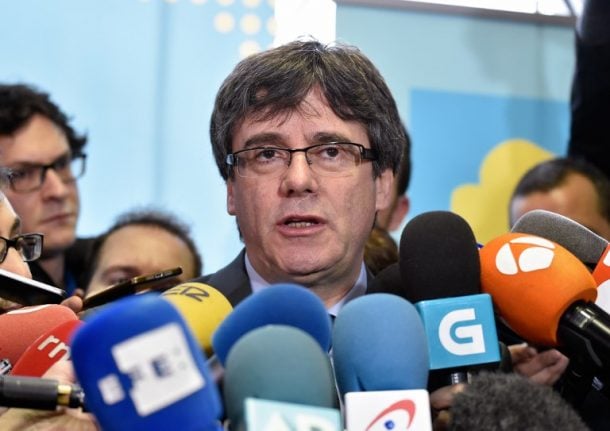 Catalonia's sacked leader Carles Puigdemont addresses a press conference after meeting with the speaker of the Catalan regional Parliament in Brussels on Wednesday. PHOTO: JOHN THYS / AFP
Puigdemont, who fled to Belgium in October after the Catalan parliament declared independence, would in the “coming hours” ask the Supreme Court for permission to attend a debate and vote in the Catalan parliament on Tuesday on his bid to form a new government, a lawmaker with his Together for Catalonia party, Josep Rull, told Catalan radio.
The newly elected speaker of the Catalan parliament, Roger Torrent, last week named Puigdemont as the candidate to head the Catalan government after separatist parties again won an absolute majority in the Catalan parliament in a December regional election.
However, he faces arrest for rebellion, sedition and misuse of public funds over his attempt to break Catalonia away from Spain as soon as he returns.
Puigdemont had said he could be sworn in to office via videoconference from Brussels, a plan Spain's central government opposes.
Puigdemont's supporters have said that he could rule from abroad by video link but has said he would rather return to Spain as long as he is given guarantees that he will not be arrested. But Spain's Consitutional Court late on Saturday ruled Puigdemont must return to the country and be present in the regional parliament to receive the authority to form a new government.
The court said that its 11 magistrates had decided unanimously “to preventively suspend the investiture of Puigdemont unless he appears in the (regional) parliament in person with prior judicial authorisation”.
It also warned all members of the Catalan parliament of “their responsibilities” and warned against disobeying the order to suspend any investiture. The magistrates said they needed six more days to consider a government bid
to annul the nomination of Puigdemont as a candidate for the regional presidency.
Puigdemont 'sacrificed?'
Catalonia's fugitive ex-president faced also faced pressure from the Catalan separatist camp to step aside in favour of another candidate to form a government.
“It is essential to have a government, if president Puigdemont has to be sacrificed, we will have to sacrifice him,” Joan Tarda, a top lawmaker for Catalan separatist party the Republican Left (ERC), said in an interview published on Sunday in Catalan daily La Vanguardia.
“We can't jeopardise our great election win on December 21. Carles Puigdemont, whether or not he is president of Catalonia in the coming years…will enter into the history books.”
Top-selling daily newspaper El Pais also weighed in, writing in an editorial that if the separatists want to government “they must renounce a candidate who is accused of serious crimes against the state and propose another.”
Torrent, the speaker of the Catalan parliament, has not yet reacted in public to the Constitutional Court's ruling.
Arrests
Catalonia's independence declaration on October 27 was short-lived as Prime Minister Mariano Rajoy moved to stop the crisis in a region deeply divided over secession.
Rajoy imposed direct rule on the semi-autonomous region, sacked its government including Puigdemont, dissolved its parliament and called snap elections. Several days later, separatist leaders were charged for their attempt to break from Spain via a banned independence referendum, but by then Puigdemont and several of his former ministers were already in Belgium.
Deposed vice president Oriol Junqueras, however, remained in Spain and was jailed along with others pending a probe into their role in the independence drive.
By AFP's Daniel Silva